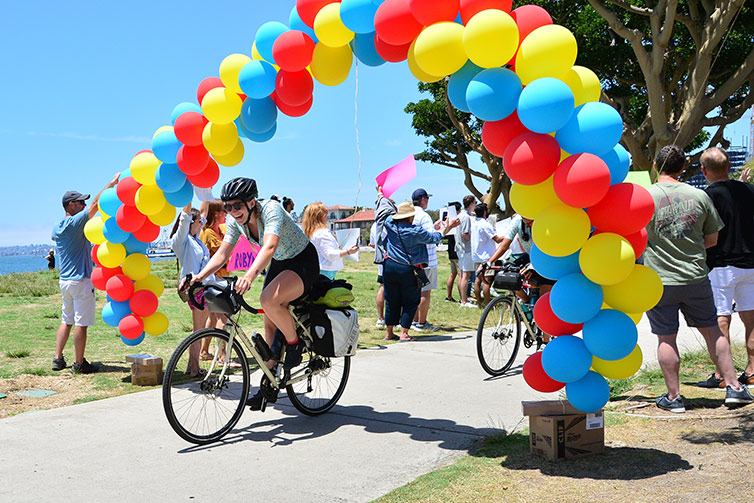 Back in June on the All-City blog, we introduced you to Pedal the Pacific, a team of ten FTW cyclists who set out in 2017 to increase awareness about sex trafficking and raise funds for The Refuge DMST. With support from Cycleast in Austin, Texas, a fleet of dreamy Space Horses, and the generosity of countless friends and friendly strangers, PTP recently completed their third 1,700-mile ride from Seattle to San Diego. Read on to learn about their trip, their mission, and the inspiring work they’re doing to introduce non-riders to the greater cycling community. 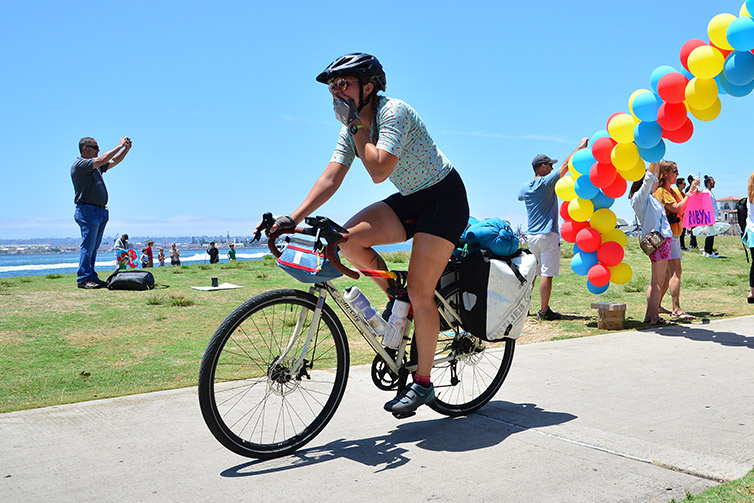 All-City: Last time we chatted, y’all were preparing for a long, long ride down the coast. Can you tell us about some of the challenges you faced as FTW riders?

Savannah Lovelace, Co-Founder of PTP: “People [were] worried about our safety. They worried we didn’t have the tenacity to finish the ride. Especially since we market ourselves as ‘hilariously unathletic girls,’ I think a lot of people were just worried for our safety. That got a little frustrating at times, but I will say that during the ride… people were a lot more prone to help us out.”

Lizzie Sammons, PTP Rider 2018: “There are some of the same challenges on this trip as there are in bigger cities and on the road. Bike shop guys are sometimes like, ‘Oh, you don’t know what you’re talking about, we’re gonna just mansplain.’ Or they’d kind of take advantage of my lack of knowledge about bikes. Whether you’re a female rider or just a beginner rider… sometimes it’s a lot like taking your car to the shop and the mechanic doesn’t want to explain things or assumes you wouldn’t understand if they tried.”

All-City: Parallel to your mission to fight sex trafficking, Pedal the Pacific also addresses those challenges facing new and FTW riders by providing an entry point into the cycling community. Can you tell us about that?

Savannah: “When we started PTP, we didn’t know anything about cycling or the cycling community. Obviously we had to learn how to use our bikes and ride them long distances, and fortunately I came across Cycleast in Austin, Texas, and its owner, Russel. We went on a 12-mile bikepacking trip to McKinney Falls with Cycleast and got to meet tons of other cyclists, and now they help us with PTP every year. To be able to pay that forward and provide an entry point for new riders is so exciting. We always love telling new riders about [the cycling community]. Everyone on the team comes from different cities, and we encourage them to go home and kind of plug in to their local bike shops and just see what happens.”

All-City: The PTP team changes over each year with ten new FTW riders. How do you find them?

Savannah: “They find us through Instagram or Facebook, mostly, and then there’s an application process. After applicants submit a questionnaire and a video, the finalists interview with a member from the previous year’s team. Then they interview with the three co-founders. It takes about six weeks from start to finish, and usually by November the team is set so they can start training and preparing.” 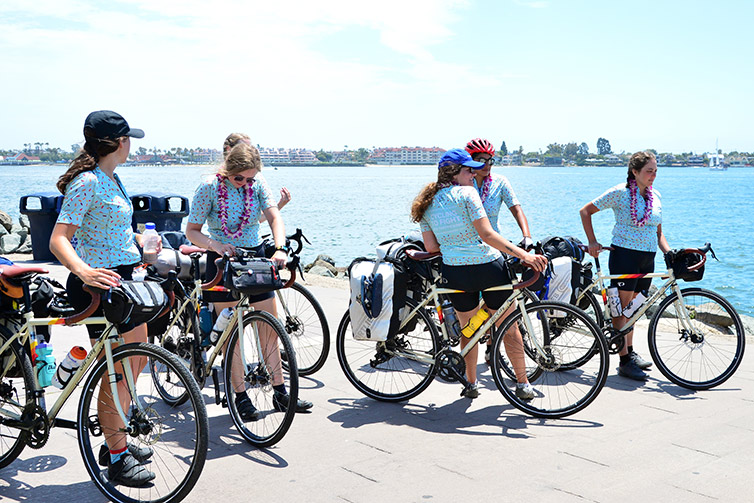 All-City: And what’s it like to prepare for a ride like this when you’re entirely new to cycling?

All-City: Can you tell us about some of your favorite stops along the route?

Lizzie: “Santa Barbara is special to me because I met their District Attorney and spent time with a sex-trafficking task force made up of police officers and members of the community. When I started reflecting on that experience, I made the decision to attend law school. All because this once-in-a-lifetime experience turned my life in a direction I never could’ve seen it going in.”

MC Mote, PTP Rider 2019: “For me it was Mendocino, California. We stayed with an adventure hiker and cyclist named Jesse, and he showed us the water tower he lives in. It’s just this dreamy, quaint place, and the way he lives his life really just inspired me to not settle. I want to live somewhere as incredible as Mendocino, and my time there just sparked a lot of inspiration for how I want to live my life.”

Savannah: “Stopping for cheese, ice cream, or beer would always keep our spirits high. Like, if spirits are low, just get ice cream.”

Lizzie: “Or farms where we could pick berries. We’d pay them and then pick as many berries as we wanted. Gotta get that!”

All-City: Your team spent a full month in the saddle. What else did you do to keep your spirits up?

Savannah: “Dance parties have been known to happen at overlooks and pull-offs.”

Lizzie: “Ah yes, the dance parties. Sometimes you just gotta turn up the music! They’re usually spontaneous, but we would just play music out of the SAG and have a good time to get pumped up for elevation or whatever. Dance parties were a necessary part of our daily schedule.”

MC: “For the 2019 team, we would share highs and lows at the end of the day so we could process what we were experiencing and share that with each other. Even within the group, everyone would have different experiences on any given day, and talking about it helped a lot.” 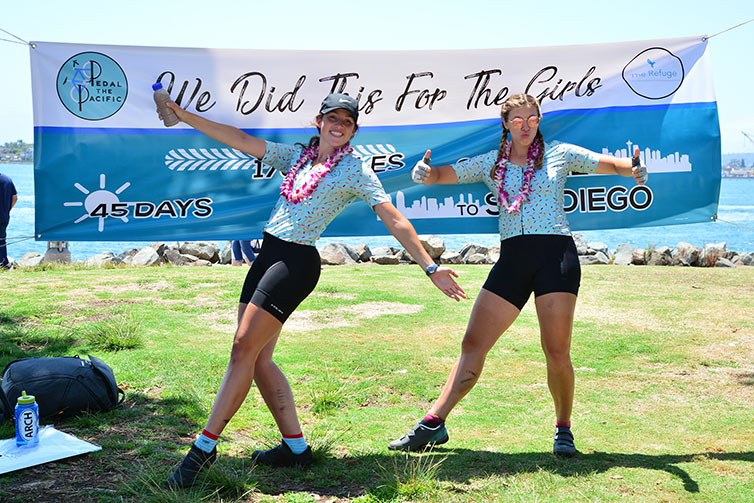 All-City: Onto the Space Horse — what makes it the right bike for this trip?

Lizzie: “It takes whatever you throw at it. The gravel and road capabilities are great. It can handle anything.”

Savannah: “The 2017 team that I was on, we didn’t have the Space Horse that year. We got it for the next year’s team, though, and we were so jealous. Because, first of all, it looks amazing. It’s such a beautiful bike, and people are always asking us about it and commenting on it. It really is the most versatile bike, like MC was saying. Road, trail, in both instances it’s just a great bike.”

All-City: Can you tell us about the gear that helped you survive the ride?

Savannah: “We didn’t have a SAG in 2017, so one of the most useful things was the drip boil. We could use it anytime, anywhere. It was the coffee maker, it was the water boiler for all of our dehydrated meals, it was just — I don’t know what we would’ve done without it. Also, zip ties and bungee cords and a good knife. We’d pull off to the side of the road and slice up apples and, you know, what would you do without a good knife?” 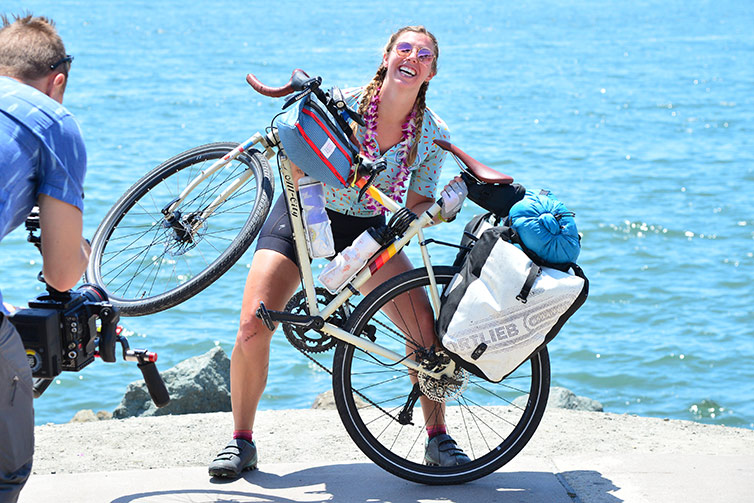 All-City: Can you tell us what you’re looking forward to during the 2020 PTP ride?

Lizzie: “It really is totally surreal to have this experience unlike anything you’ll ever do again, and then a year later, you watch 10 or 11 girls go through it, too. To just see them visit the same places, meet the same people, ride the same route, and at the same time have different, unique experiences — it’s just special to see people have this crazy incredible experience and then live through it again.”

Savannah: “One more exciting thing: This is the first year we’ll be riding as an official non-profit. We are officially our own 5013C now!”

All-City: Last question: How will you remain active in your cycling communities between now and the next trip down the Pacific?

MC: “In Arkansas, there’s a huge cycling community. Just a ton of mountain biking and gravel events, routes and tours through Arkansas. I’m doing my first century in September, and so I just want to participate in as many events as my schedule allows. So I’m gonna take my Space Horse and do it!”

Savannah: “In Austin, we’ve had the opportunity to lead short morning rides with a local company called Outdoor Voices. They’re all about getting out and doing things, whether you’re active or not. So that attracts people who might not even be cyclists, and it’s fun. We do like a 3-mile ride around the lake downtown and end with tacos. And so we get to introduce people to the cycling community, and we get to get on our bikes, too, which is super fun.”

All of us here at All-City are excited about the work Pedal the Pacific is doing, and we’re grateful to be part of it. If you’d like to learn more about their mission, help them out, or follow along with their next ride, visit www.pedalthepacific.com.