When Swift posted the invite to their annual Solstice Campout, we jumped at the opportunity to host a MPLS event. Being that our Space Horse is the perfect machine for loading up and escaping the city, we thought this would be a great opportunity to connect with some people from the community and show them how All-City does bike camping. We set up an invite, booked a campsite and ordered up koozies…because what awesome party ride doesn’t involve koozies?

As the campout weekend approached, we were watching the forecast and cringing. Everyone knows Minnesota weather can change in an instant, so we didn’t really know what to expect, except it could get gnarly. T-storms were likely throughout the day. By the time Friday night rolled around, we decided we’d have a large enough window between storms to make it happen. The campout was on.

The next morning we were joined by the sun, a very hot sun, and twenty-some bright eye’d, gear-toting bikers ready to make the 60-mile trek to Ann Lake campground. We were super stoked on the turn-out and we couldn’t have asked for a better crew to roll with. We had a variety of bikes, bags, trailers, and a trail-lovin’ dog. To top it off, our sponsored rider Nikki and her beau, Andy rocked the Salsa tandem! After some Peace Yeti cold press and a few alternative morning brews, we were off. 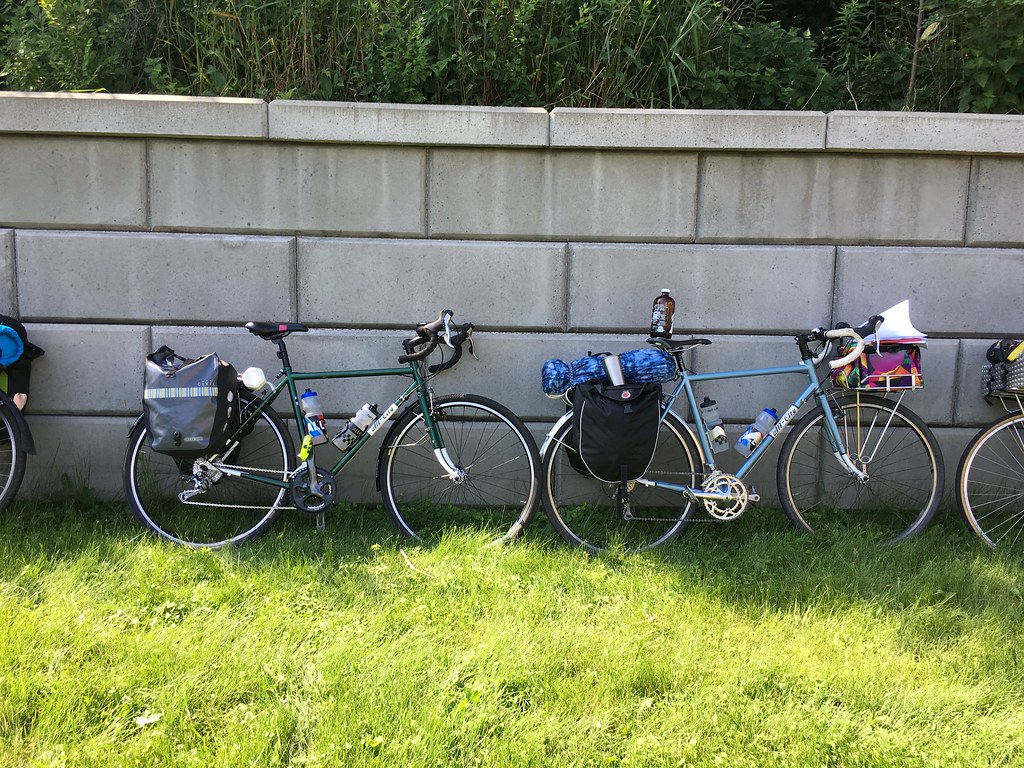 Thanks to Kurt Stafki for capturing and sharing some great photos. (Most of the good ones in this post are his.) 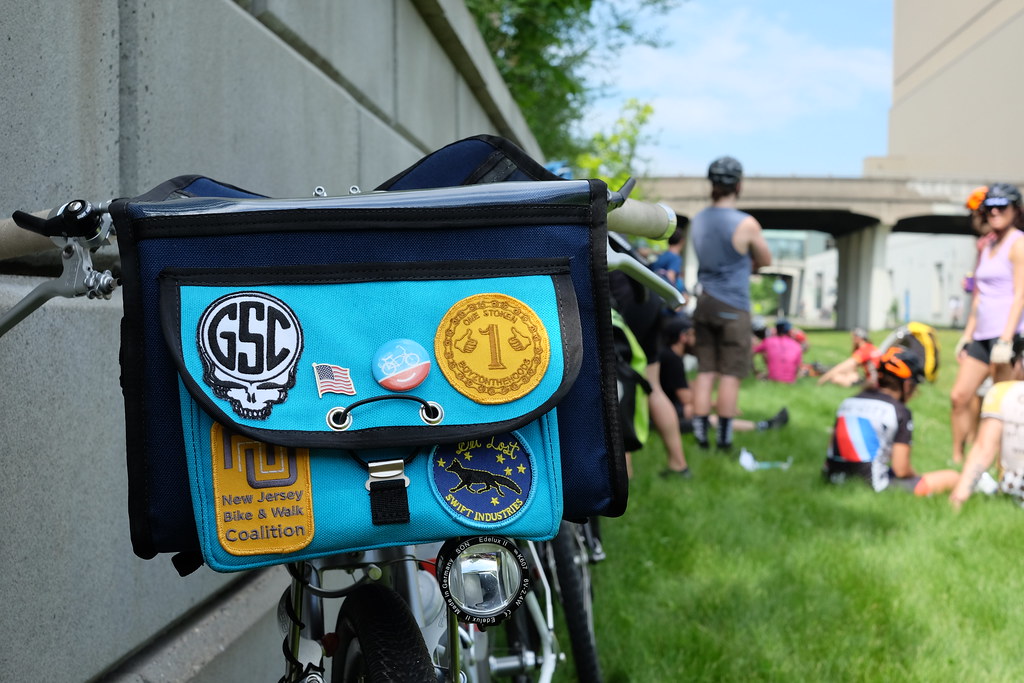 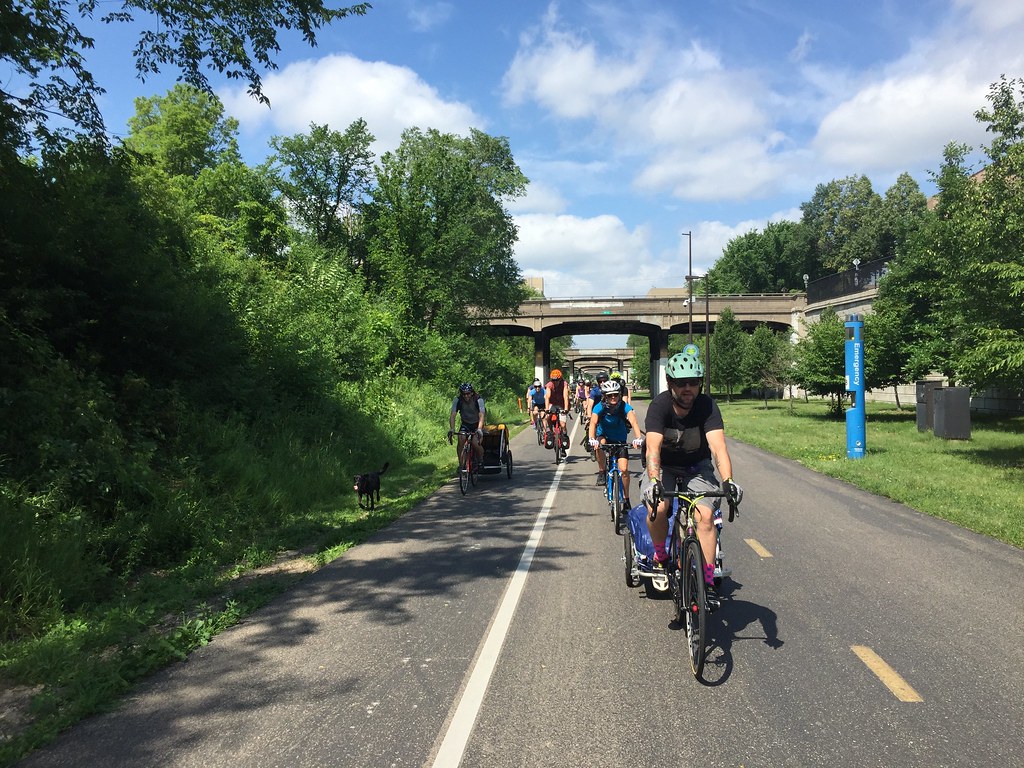 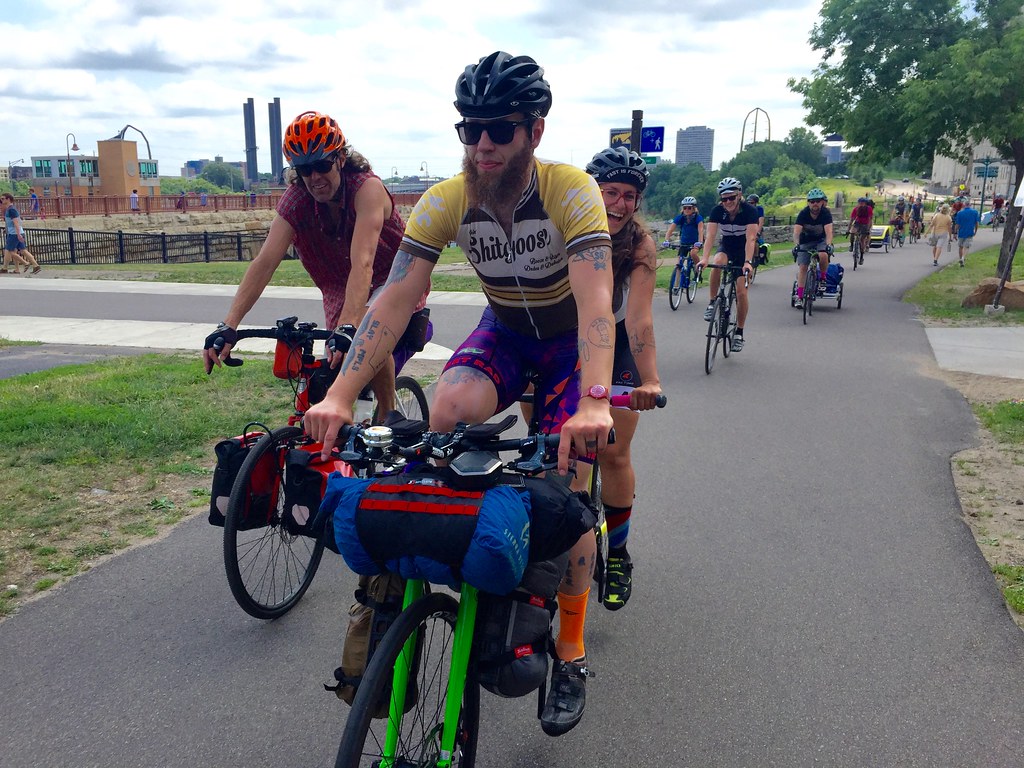 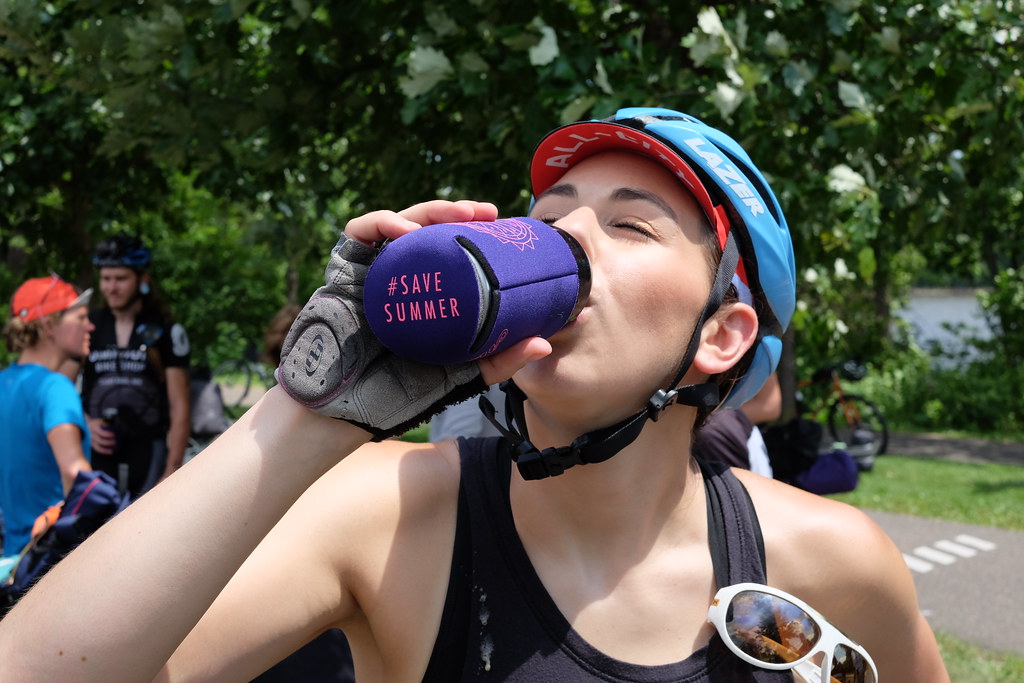 Our first flat and mechanical incident happened just after we jumped on the LRT headed north. Little did we know this would be the theme for our day… But what good adventure doesn’t include some mishaps?

We got a little beer-stop happy early in the route, due to waiting on stuff to get fixed, but we finally settled into our pace and knocked out the first 30 miles. The last ten of those 30 got a little hairy. After we exited the designated bike paths along the river, we got onto some narrow shouldered highway which begat more flats, beating sun, and hills that made people wish they’d left the trailer and dog at home. With the 106 degree heat index, we were sweating buckets and plowing though our water supply. We stopped to rest in some cool, grassy shade to recharge. 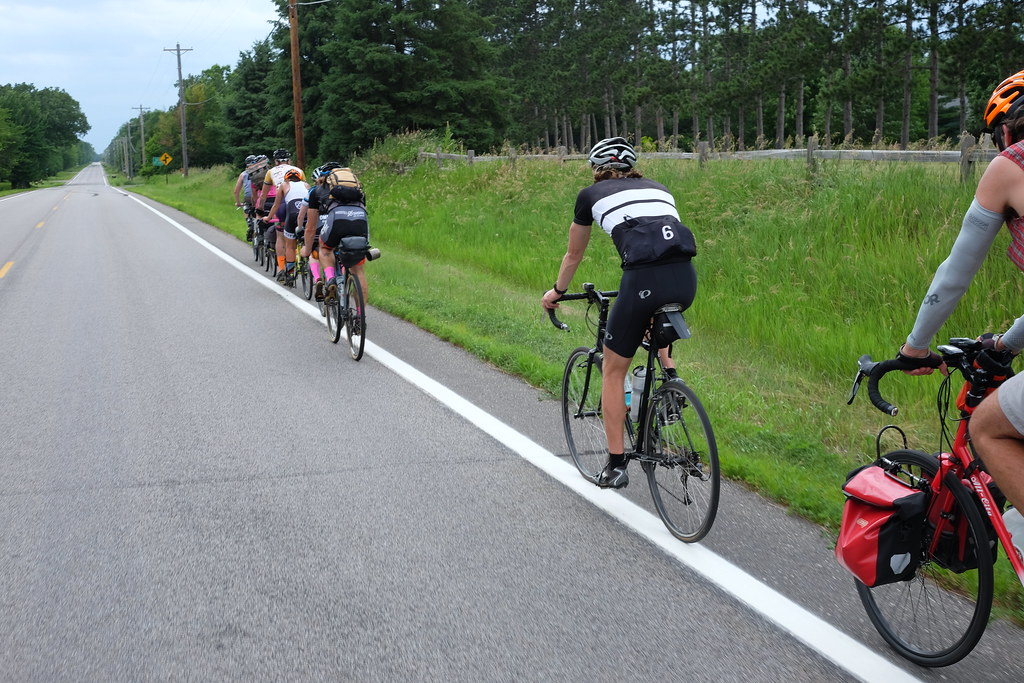 The next 20-mile push to Big Lake had us racing an impending storm. Riding into 20mph+ head winds, we were hoping to make it to Lupulin Brewery before things got weird. We were thankful for the brief, but magical field irrigation showers that offered some relief from the heat, but our bikes were still acting up. We suffered a couple more flats, a complete tire blowout on the tandem and a stripped crank arm, which left our friend Trevor to ride the last mile with one pedal. Yup, by the time we made it to Lupulin, we were all ready for a drink. The storm was about to hit as the last of our entourage rolled in. We grabbed beers, propped up our legs and waited for Armageddon. Ten minutes later, after some heavy rain, it was over. This great storm of the century we’d been agonizing over for the last week turned out to be a nothing more than a sun shower. Nevertheless, we took our sweet ass time at Lupalin. 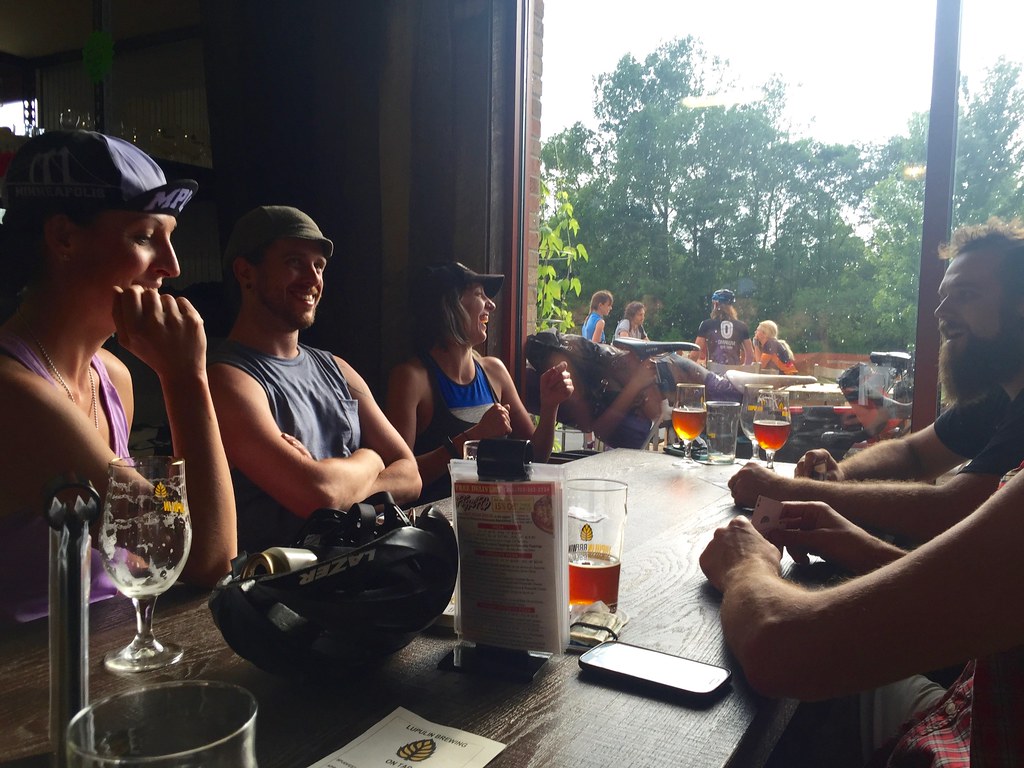 A couple hours later, we rolled out to grab food and beer and make the final 10-mile jaunt to the campsite. The wind was at our backs and the sun was dipping low. For some, that last leg was magic, for others, it was a little rough. People were derailed, once again, by more flats and a random detour through a horse fly infested swamp (thanks to Google maps for their “shortcut”). 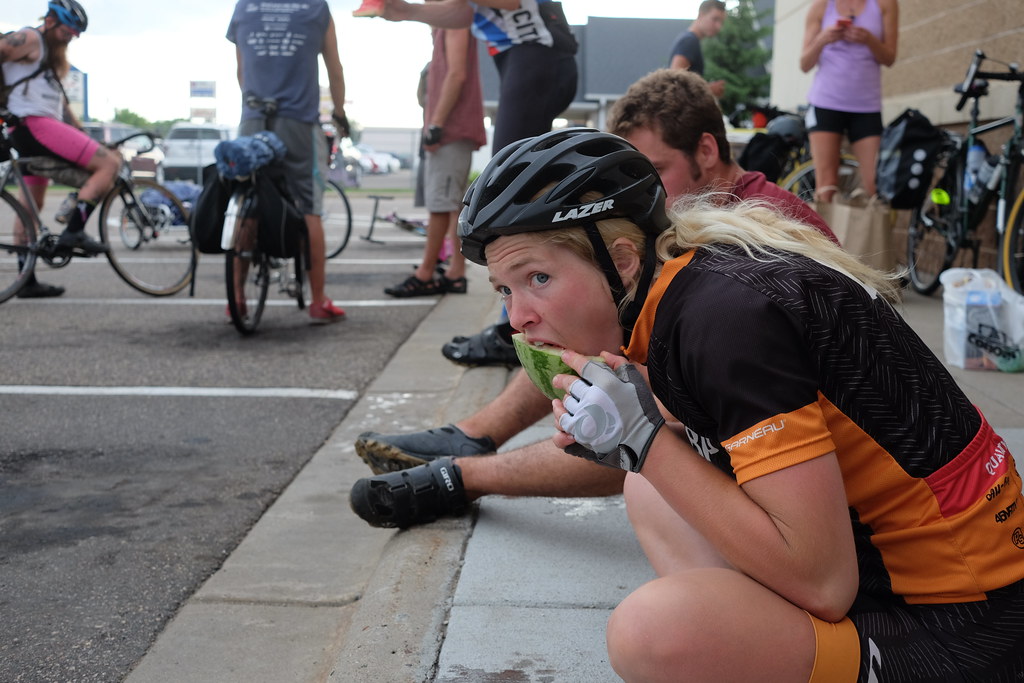 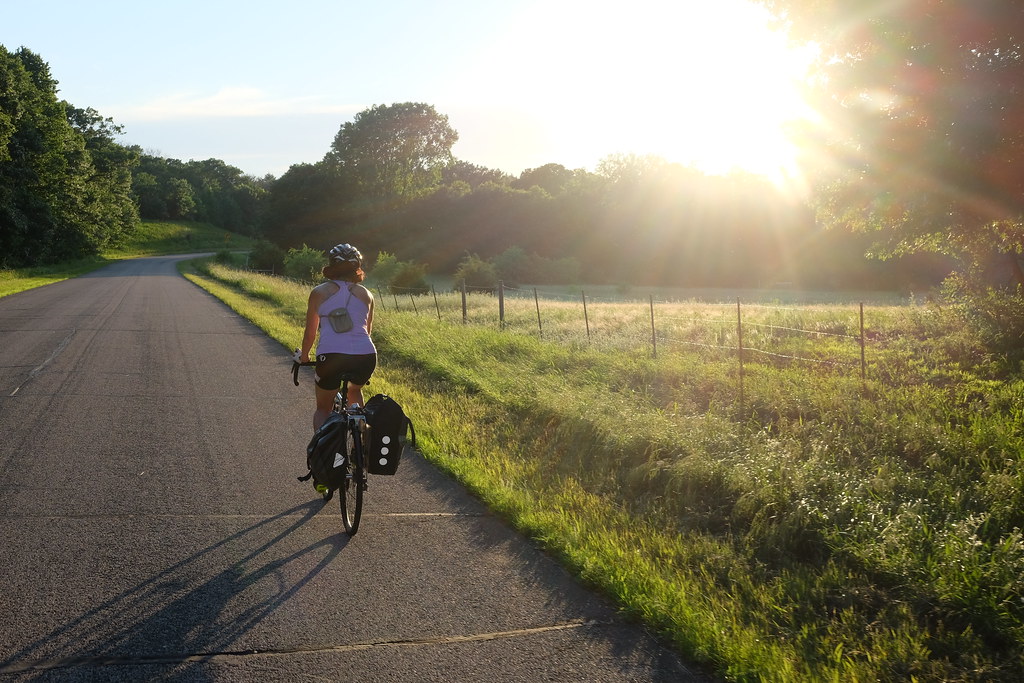 Finally, we rolled up to this amazing private campsite overlooking Ann Lake, where the All-City party tent and coolers of beer and cider were waiting. Everyone rushed to set up camp, whipped on their suits and tore through the poison ivy overgrowth to the beach. Oh, what a magnificent beach. Cool, clear water, soft white sand. All the struggles of the day faded away. It was us, and our comrades reveling in the accomplishment and the experience. Laughing about our sunburn and bug bites and sore muscles. 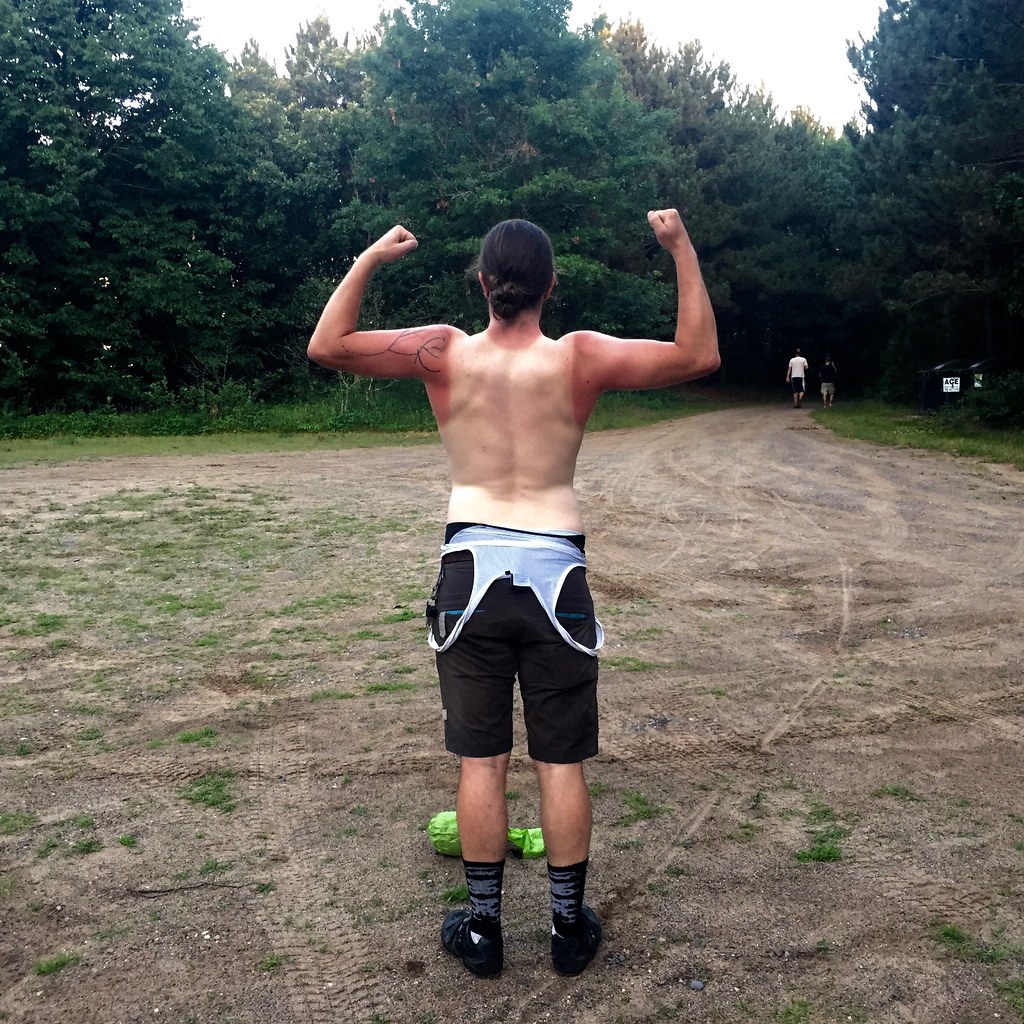 The night closed in and found us gathered around a campfire, roasting meats, drinking bevvies and telling stories, which gave way to a dance party, star gazing and crawling into our tents happy and exhausted. 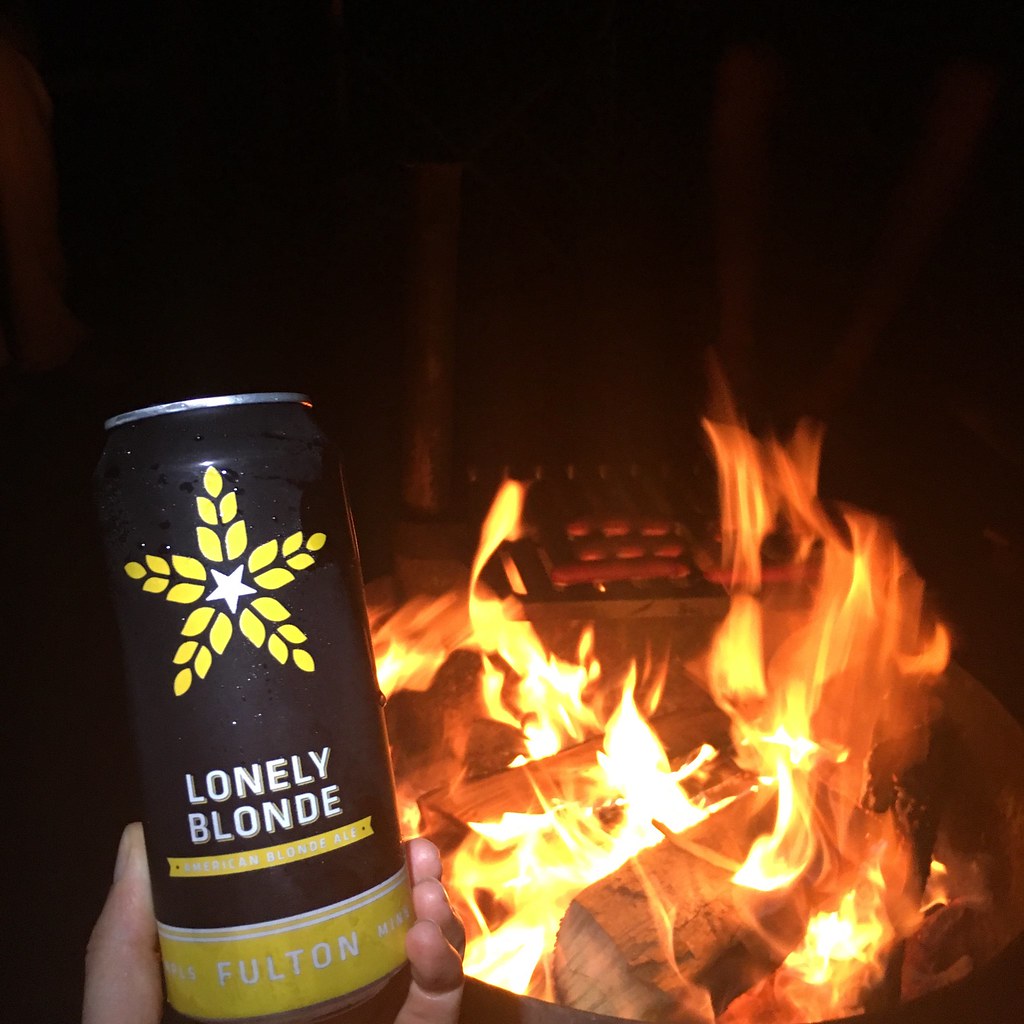 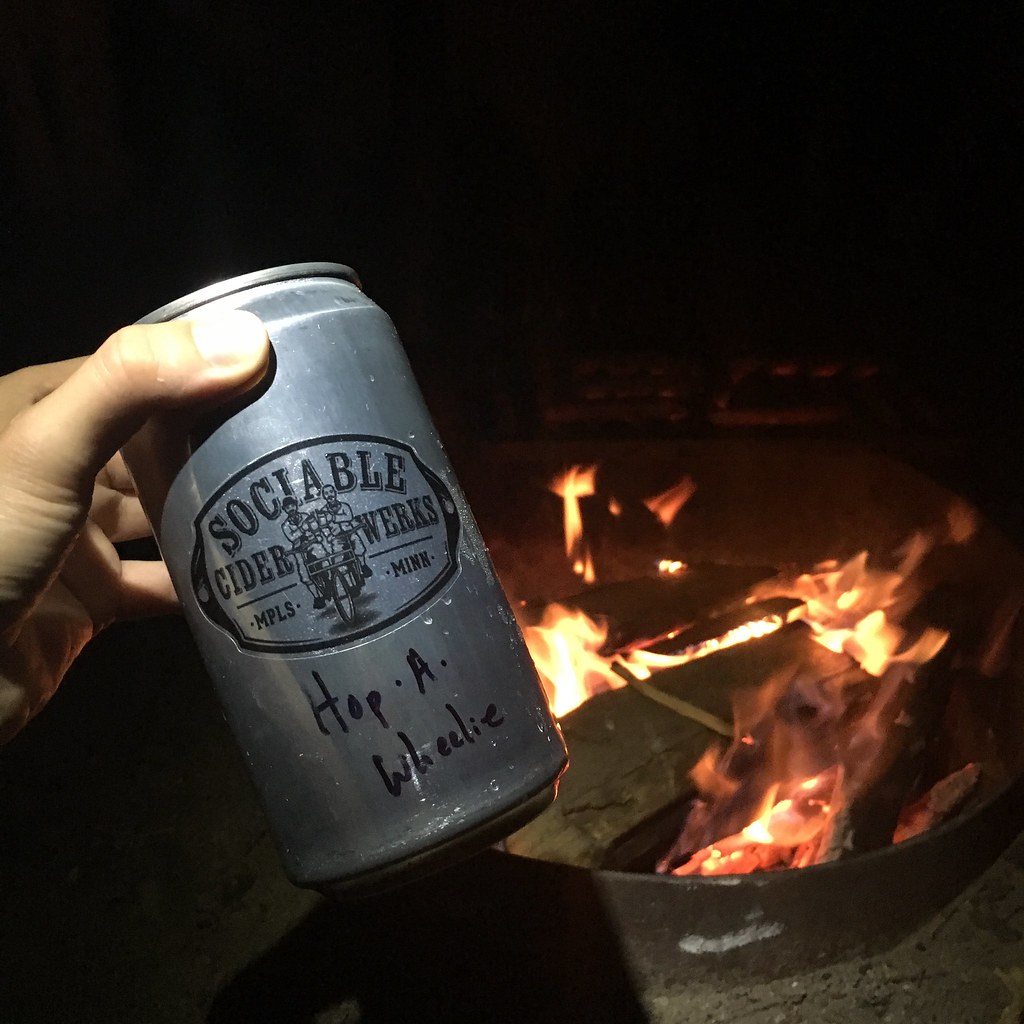 Sunrise. More cold press. Re-hydration. We packed up a little late and rolled out to catch the Northstar train home. Once again, we were racing time. 10 miles, a headwind, more flats. We thought we lost a few soldiers, but they rolled up in the knick of time. We stretched our legs and aired out our pits in the cool, comfy train car, which we luckily had all to ourselves. We sat back and watched the landscape change from farmland to suburb to city. In one hour, we were home in good ol’ MPLS. We said our goodbyes to our weary-but-cheerful companions, promising that we would do this all again. 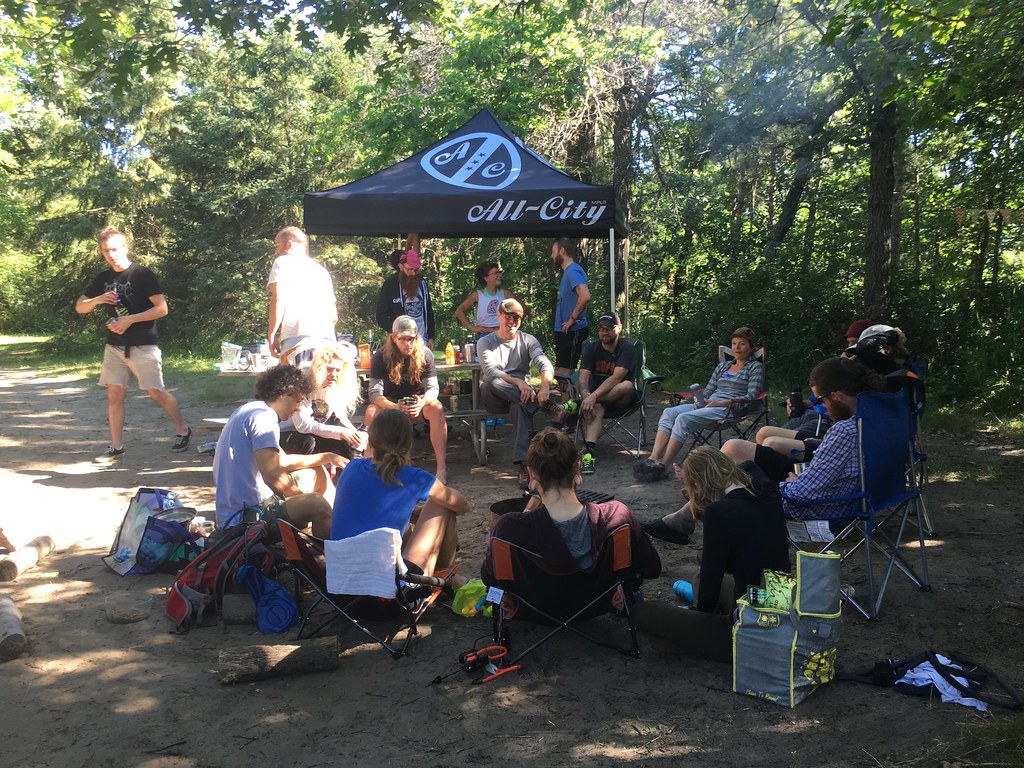 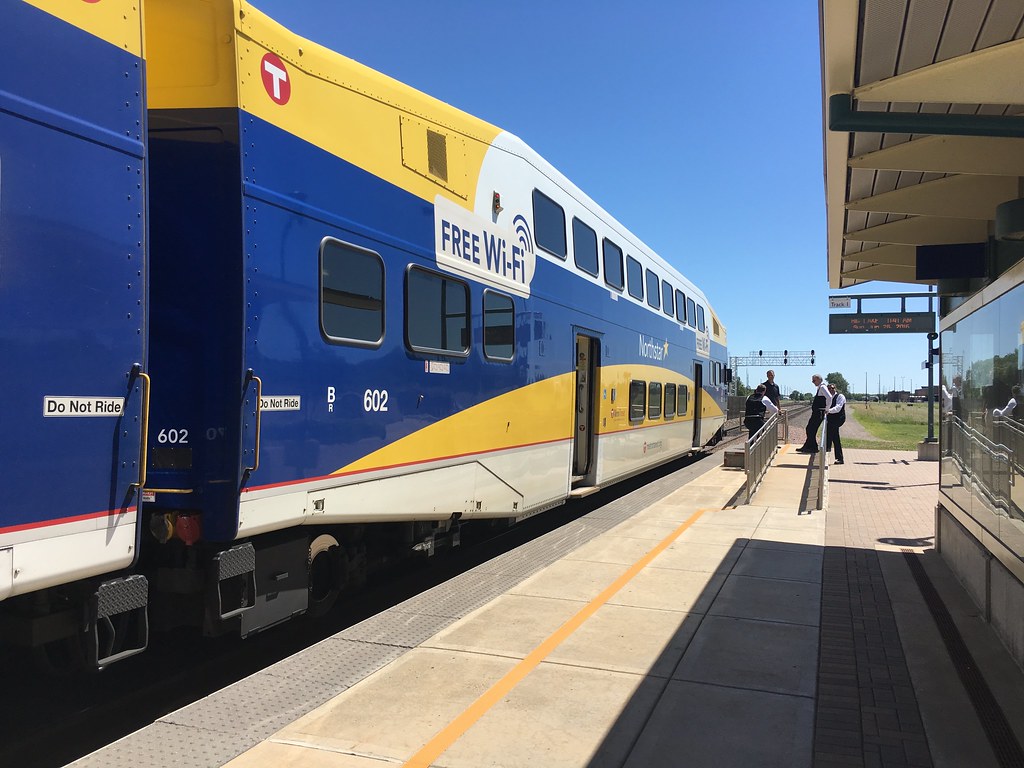 Cheers to every single person who joined us. You rode like champions in the face of some mild to moderate adversity and did it all with smiles on your freaking faces. Much crisis was averted thanks to mechanical support by Will and Henry from the Hub. Thank you so much to our great sponsors at Peace Coffee, Fulton Brewery and Sociable Cider for providing the tastiest, most necessary beverages. Thanks to Swift Industries for inspiring the ride. To all of our local All-City shops: The Hub, Angry Catfish, Freewheel, Behind Bars and to Bunyan Velo for helping get the word out. And finally, to our awesome SAG wagons – Lisa Strauss and Kyle Sauter, without which we would have been totally screwed. Oh, and to the Space Horse…you lovely, lovely animal, you.

That’s so amazing and fun adventure. I am Thai person who want to know where were the cities or countries you have biked past. I just want to know that to do my homework . I like adventure life but I cant . anyway I will come back to see your answer sir, thanks a lot. 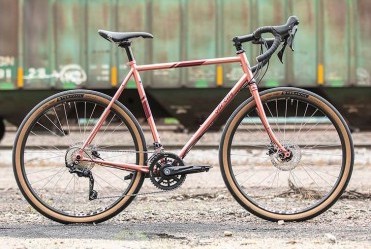 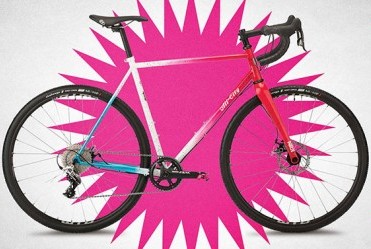 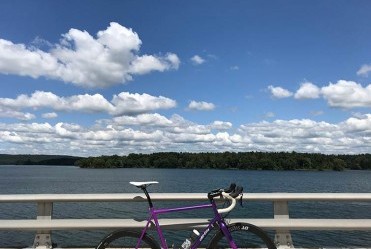