In medieval and Renaissance literature, Oberon is the immortal king of fairies and husband to Titania. If you were awake for your high-school English class, you might remember him from Shakespeare’s “A Midsummer Night’s Dream,” a wickedly funny play featuring poorly administered love potions and a talking donkey. Kind of like Shrek 2. A little further back in time, Oberon was known as Alberich, a legendary 5th or 6th-century German sorcerer who guarded a dragon slayer’s gold treasure with the strength of twelve men.

Today, however, Oberon is the name we’ve given our proprietary blend of custom-designed 3AL/2.5V aviation-quality titanium tubes. Thoroughly modern and classically styled for premium ride quality, irresistible fun, and forever durability, Oberon Titanium occupies an esteemed spot in our line alongside exceptional steel and aluminum tube offerings. But before we jump into bikes, let’s talk Ti. 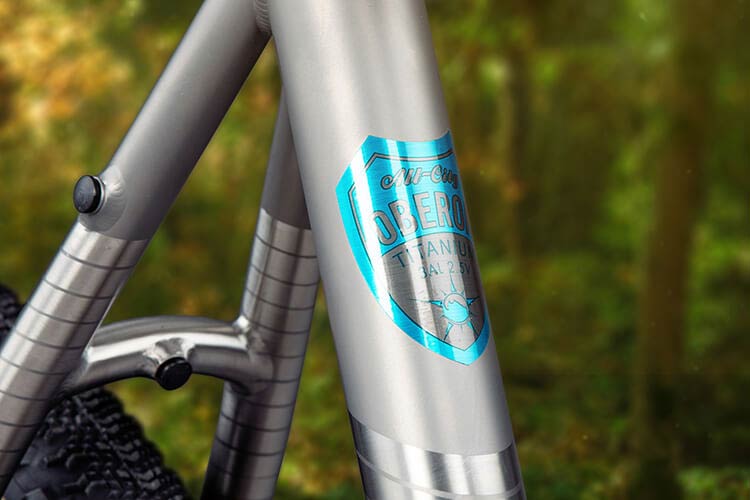 Where Does Titanium Come From?

Ask All-City’s Art Director Emeritus Saisha Harris and she’ll tell you titanium was born on planet Mars and traveled to Earth in an alien ship. Check the historical record and you’ll see an English pastor named William Gregor first dug it up in Cornwall in 1791. Further muddying the waters, the Mars lander Viking I confirmed the presence of titanium in Martian soil back in 1976. It’s even been detected in meteorites, in the Sun, and in the human body. It lives, breathes, flies, and explodes.

Matthew A. Hunter, an American metallurgist working for General Electric, was the first to isolate pure titanium in 1910. Then in 1930, William J. Kroll pioneered a process for extracting titanium on an industrial scale. Celebrated for its incredible strength-to-weight ratio and superior corrosion resistance, by the 1950s titanium was being used to build up Cold War-era submarines, military jets, and a National Defense Stockpile.

What Can You Do With It?

Methods for processing and producing titanium continue to evolve, and it remains a valuable industrial material today. Titanium is used in sunblock, tattoo ink, skywriting smoke, and even pyrotechnics — think fireworks and Bon Jovi concerts.

While these examples are impressive, you might be more familiar with titanium as an alloying agent in modern and commercial aircraft and spaceplanes. Currently orbiting the planet aboard the International Space Station, titanium is found in machines, tools, and structures scaling the highest heights. And here on solid ground, it’s used famously for sculptures, architecture, and in some of the world’s most beautiful and best-loved bicycles.

Depending on your source, people have been boppin’ around on titanium bikes for about 50 years. Built in Birmingham, England, in 1975, the Speedwell Titalite lays claim to being the world’s first production titanium bicycle frame. Made from commercially pure titanium, it was marketed as 40% lighter than steel and three times stronger. 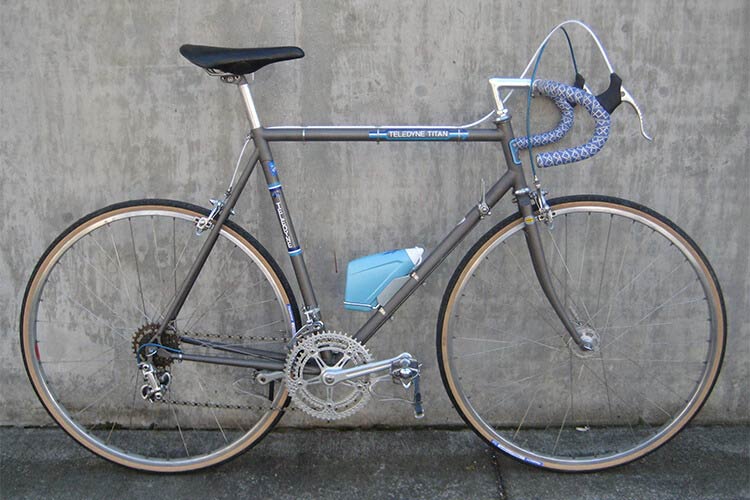 The Teledyne Titan was another early Ti bike. Made in California, it was available in limited quantities from 1974 through 1976. Known for being two-thirds the weight of its comparable steel-framed cousins, it too was built from commercially pure titanium and thus prone to cracking. (This is because the titanium alloys used in today’s frames, though stronger, were typically earmarked for military applications during Teledyne’s heyday.)

Custom frame builders, racers, and other industry innovators began to experiment with titanium around the same time. Between 1970 and 1975, in fact, a self-educated German frame builder named Fritz Fleck built up 25 road and track frames from scratch, calling in favors from friends to access a vacuum chamber where he could do his welding in an oxygen-free environment. A racer by the name of Günther Haritz grabbed gold in the Olympic team pursuit on one of Fleck’s Ti frames in 1972. A year later, Luis Ocaña rode a Speedwell prototype over the mountain stage of the Tour de France and eventually won the whole dang thing. 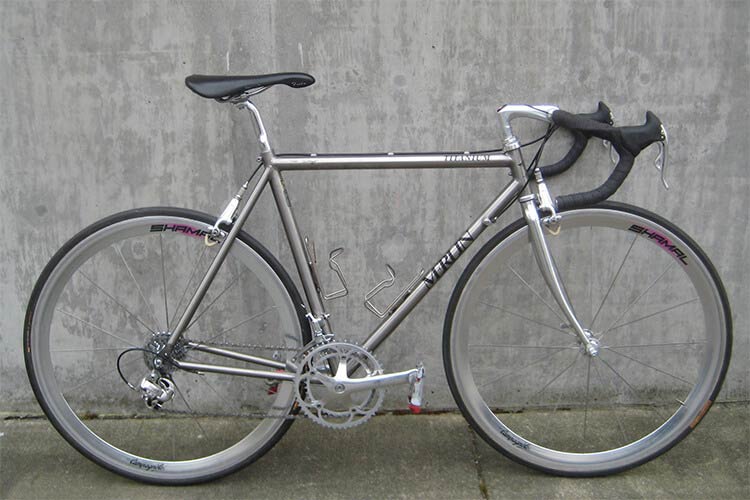 Thanks to advances made in the aerospace industry throughout the 1980s, the titanium alloys available for building bicycles improved quickly and dramatically. In 1986, the team at Merlin bikes built the first titanium mountain bike frame. Fast-forward to 1988 and famed VCR maker/industrial giant Panasonic introduced the Individual Custom System, which allowed cyclists to build up semi-custom titanium road and mountain bikes. Available in a range of sizes, spec options, and color choices, riders could even have their names laser-etched into the stem or silkscreened onto the top tube.

In 1991, a year after his third Tour de France win, American Greg LeMond rode a titanium frame in the tour. He didn’t win, but his prototype of the Merlin Extralight ignited a titanium craze that lasted through the mid ‘90s. All-City Product Manager Max Thomas caught the titanium bug around this time, drooling over pictures of John Tomac’s Raleigh offerings in bike magazines and dreaming of exploring the bandit trails of Minneapolis on a titanium bike of his own.

Although steel, aluminum, and carbon frames are more common, to this day titanium is considered a magic material boasting elite strength, weight savings, durability, performance, mystique, and allure. But one thing we haven’t covered is how it feels to ride a titanium frame. For that, we turn to Max, All-City’s resident bike whisperer:

“There’s an intimate and specific relationship between the frame and the rider,” he says. “Let’s say you’re leaning into a turn. What does it take to enter that turn? Are there cues or clues that you get physically from the frame, telling you how much work you need to do to maintain and complete the maneuver?”

“Riding a carbon frame can feel comfortable, effortless, and fast, but feedback from the material is minimal. That’s great in a race, but most of the riding we do isn’t in a race, is it?”

“Steel will provide feedback immediately. It tells you what it’s doing when you’re climbing, descending, or making a turn. Same for titanium. But titanium is smooth; it vibrates in a different frequency from steel. It’s like a different language. That liveliness — that feedback — it provides a sensory input, a heightened awareness, that allows you to understand where you are and what you’re doing. For me there’s just more enjoyment and excitement when I’m in sync with the frame and able to understand what it’s telling me.” 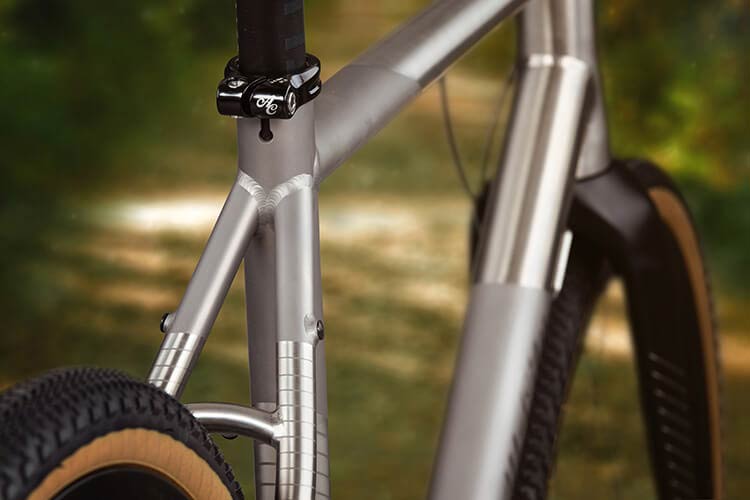 If that all sounds pretty damn romantic, that’s because it is. Oberon tubes are made from the finest and most durable titanium available, and they allow us to maintain the traditional bike aesthetic we love while giving us complete control over performance, handling, ride characteristics, and more.

We’ve channeled a great deal of love and hard work into tube diameters, wall thicknesses, butting profiles, and shaping to make these frames ideal for the type of riding they’re meant to do. 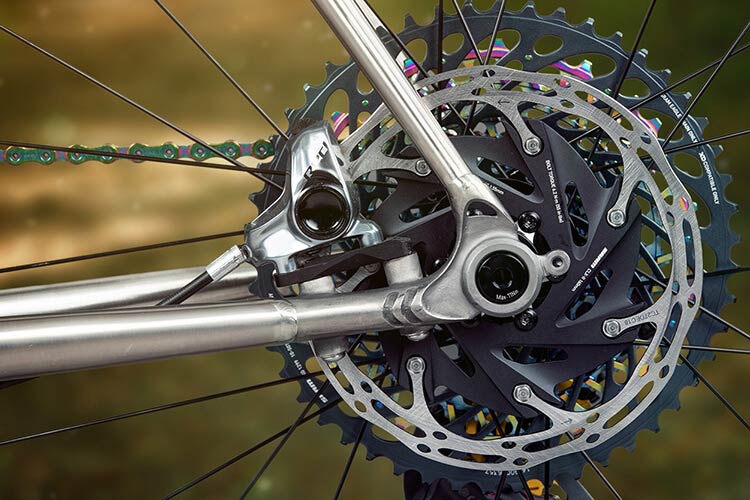 We’ve custom-designed all-new titanium dropouts and pored over thousands of small details to make these frames as stunning as they are strong.

We can’t build a bike out of fairy dust or love potion. But we can build one out of titanium, and we can make it beautiful, make it fast, and make it last. So we did. Now enjoy!