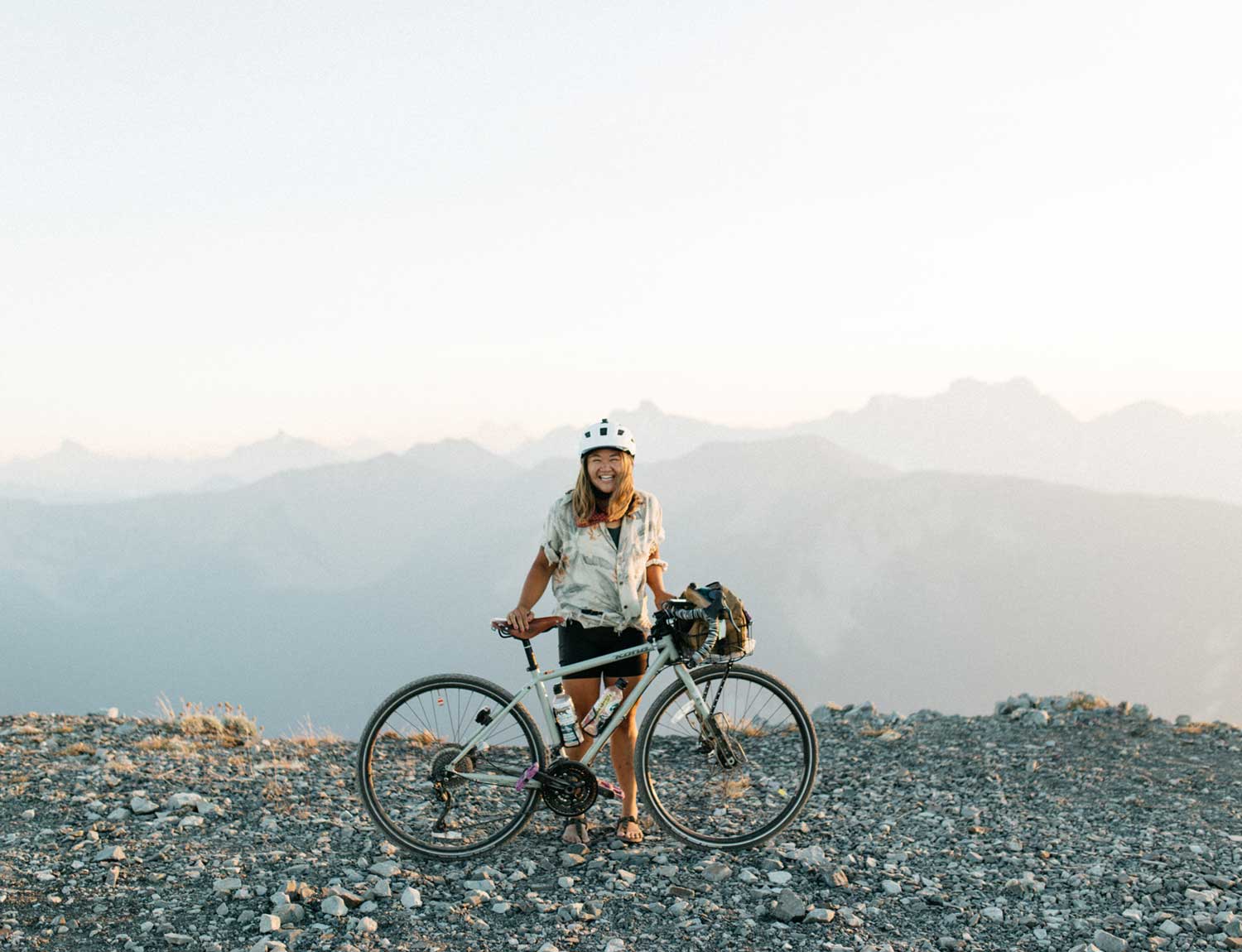 I was born in Massachusetts, and my Taiwanese mother was widowed when I was 8 years old. She then moved my older sister and I down to Texas where we spent our adolescent years growing up. My mom worked nights and did her best to provide for us as a single mother but in reality, we were raised by the television and frozen dinners since she was not around much. I have so much respect for her looking back and have been recently unpacking our family history, and it’s not the easiest. Unfortunately, most of our childhood memories have become a blur due to family trauma, but I wouldn’t change a thing because it’s shaped who I am today.

After college, I decided to pack everything up from my small college town of San Marcos and move up to Seattle where I currently reside. I was deeply drawn to the mountains, water, crisp air and colors. It wasn’t until 2012 where I started dipping my toes into the outdoors and seeing what my body was finally capable of. I got my first road bike and signed up for STP 2013 (Seattle to Portland) and fell in love with long distance human powered adventures. I started getting into hiking around this time and decided to thru-hike the Pacific Crest Trail in 2016. It was an immense privilege to have been able to commit to something like this and want to acknowledge that. After walking 1,800 miles from the California/Mexico border, I fell on a blowdown and fractured my ankle just outside of Crater Lake, Oregon and had to end my hike with many lessons learned. After spending the next ten months regaining my strength back again, I finally completed the PCT in 2017 from Oregon to Canada. It felt like a weight was being lifted off my shoulders and was closing one chapter my life that was never finished.

A few months later after coming back to Seattle, I ended up getting really sick and was mostly out for the next ten months trying to heal myself through a Topical Steroid Withdrawal. It was an extremely isolating, painful and dark period of my life where I felt like I could never see the light at the end of the tunnel. I don’t think I could’ve pushed through the way I did without having the PCT under my belt, showing me what mental stamina and resilience truly is. After regaining my health back, I wanted to enjoy life again, appreciating even the tiniest of moments. I want to continue living my life to the fullest and want to know that I’ve impacted people in a meaningful way when I leave this earth.

Seven years later after I was first introduced to bikes (my gateway to the outdoors), I told myself I wanted to finally live out my dream of bike touring someday. So in 2019, I traded in my aluminum racing bike for a steel touring/gravel bike and have never looked back. Honestly, I feel like this decision to revisit bikes outdoors has changed everything for me. I spent most of 2020 baking and delivering bread on my bike in the city and rode over 5,000 miles in one year. I closed out the summer by riding up to Harts Pass/Slate Peak gaining 5,322 ft in 26 miles and even got to hike on the PCT for a bit! I was so proud of myself, and it was super special getting to revisit this place that is very dear to my heart.

What are your plans/hopes/dreams for 2021?

I would like to go on a longer bike tour and get my tires set up for tubeless, but things are so uncertain with COVID! We’ll just have to wait and see. :)

Currently, I’m really into baking projects. I first got started with sourdough in November of 2019 and went full tilt in 2020. Now, I’m experimenting with treats and different doughs. I also volunteer at the farm during the summer season, so I love starting food projects with whatever is currently in season.

I also love learning about people and bringing together like-minded folks with similar values to foster an inclusive community. It’s been hard to do this during the pandemic but hopefully in the next year, we can make some more things happen!

For 2021, All-City Sponsored Riders chose an organization to receive a $1,000 donation, made by All-City - what organization did you choose, and why?

I chose Bike Works to donate to. I found out about them a few years ago when I got into cycling, and they do great things in the city of Seattle to promote bicycles as a vehicle for change to empower youth and build resilient communities. Bike Works is committed to making bicycles accessible, affordable and welcoming to everyone from all different walks of life. They have been actively working towards becoming an antiracist organization and are currently writing their next Strategic Plan for 2021-2025 and their commitment to racial equity.