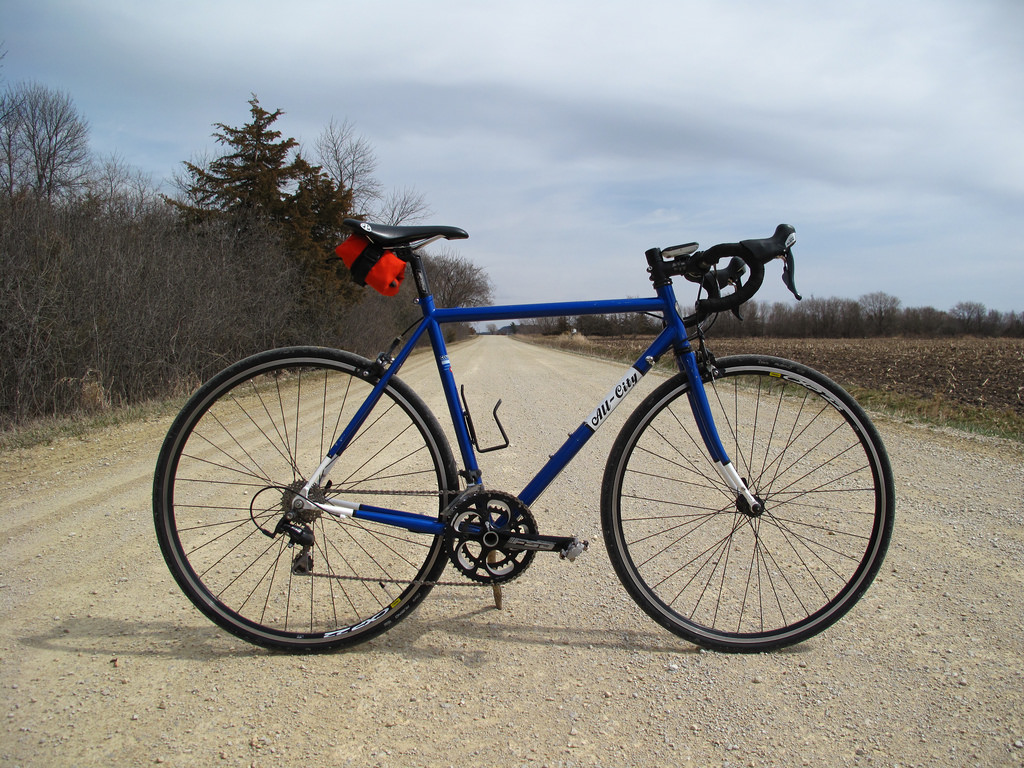 The Story of the Mr. Pink

The Story of the Mr. Pink

Most of our bikes have a simple story behind them, no one was making a track/road/cross/ etc bike the way we wished one existed so we built ourselves one. Such was the case with the Mr. Pink. There just wasn't a production bike that combined the capabilities and qualities of the road bike of our dreams so we had no choice but to make one and hope that others shared our beliefs and taste.

Here are a few things that were going on in the industry at the time:
There were a few high end road steel road frames on the market, but none of them had a matching high end steel fork, they were all carbon.
The NAHBS thing had yet to really kick in full steam.
Larger volume tires for road bikes / gravel had yet to come into fashion.

I raced Almanzo on a Nature Boy single speed because I owned no geared bike that was appropriate for gravel use. This had to be fixed. I wanted a roadbike that ticked all of my boxes and realized the only way to get that was to go custom.  The logical choice for a builder was my friend Erik at Peacock Groove since I'd always wanted a bike from him anyway. 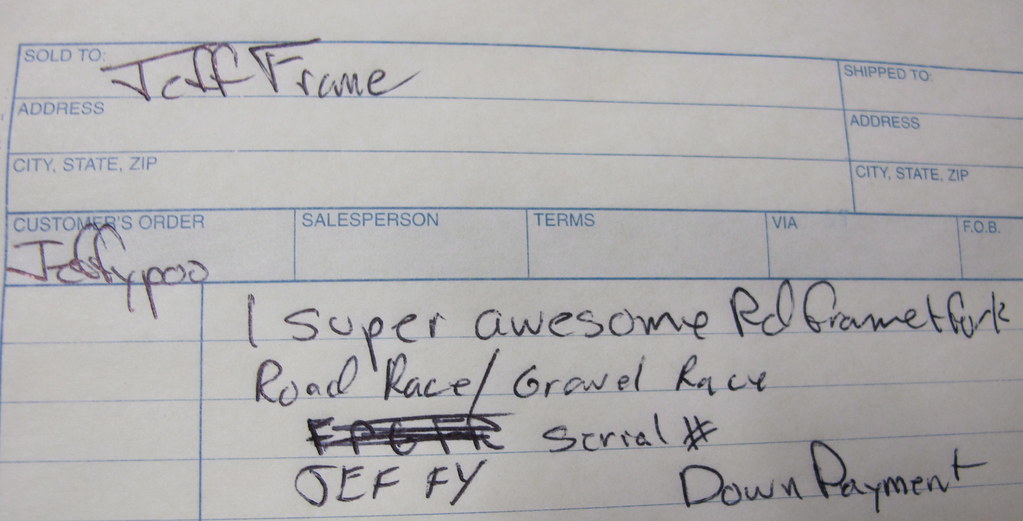 the receipt for my downpayment for the PG-40

In order to get the geo and fit down, I handed over my trusty Benotto and had Erik take it's measurements as that was the bike that fit me best. 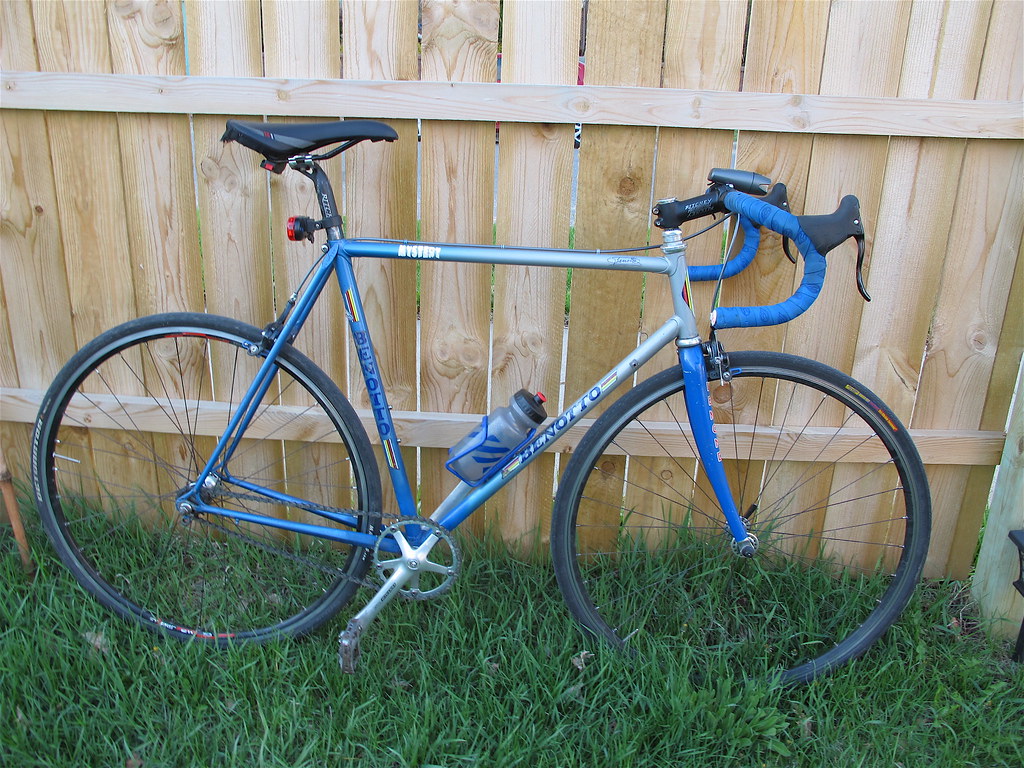 My trusty Benotto single speed road bike. This was my alleycat race rig, and the fit basis for my custom Capricorn, the Big Block, Peacock Groove, Mr. Pink, and by extension every single All-City ever. 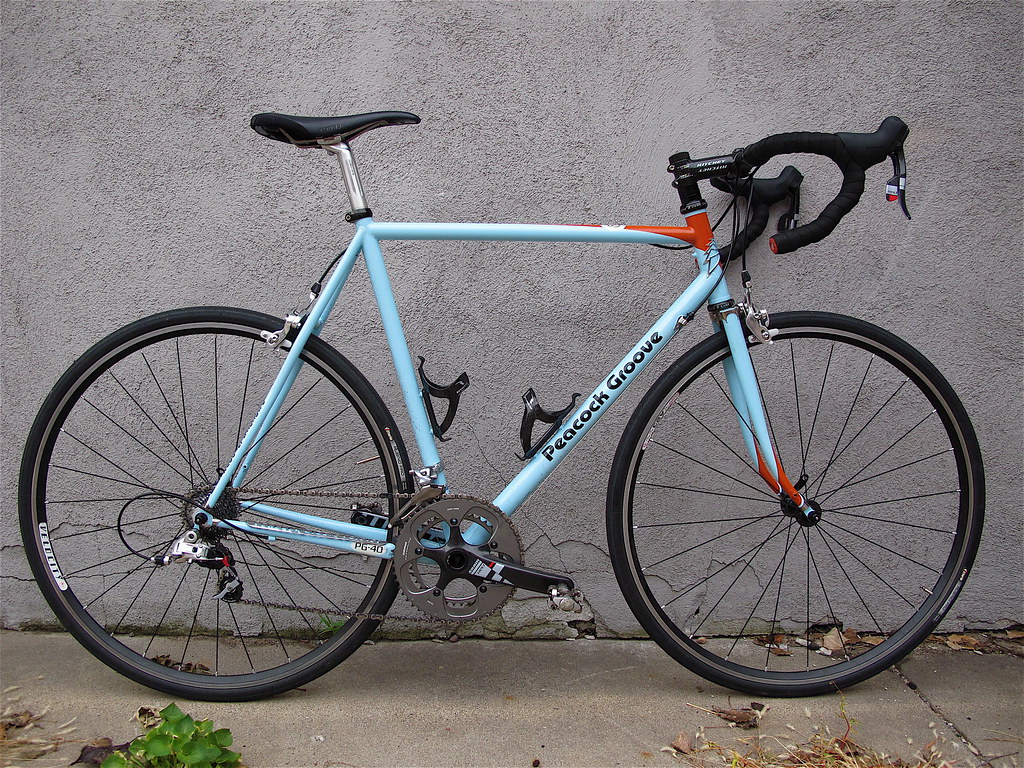 The result of the Peacock Groove project was this (2010 build). Super detailed, lightweight, stiff yet plenty comfy, and just plain awesome.

Fast forward to 6 months later and I've convinced the boss lady to let us do a road bike. Not surprisingly, my list of requirements had not changed substantially since the kickoff of the Peacock Groove project.

Once more I laid out the requirements for my ultimate roadbike, this time however it was Adam's, All-City's first engineer, turn to run with those requirements and put his unique stamp on the geo. We also added a bit of a twist: for the Groove I wanted a traditional road bike (plus the bigger tires), this time the goal was to build the ultimate alleycat racer. Meaning the priority was on agility, stiffness, and power transfer.

Both the Benotto and the Peaock Groove were measured and consulted, we talked about what I liked and didn't like regarding both models, and set a direction to an even more aggressive version of this features package while still allowing for ample room for fatties. After all, city streets only seem to be getting worse and we knew that there was something to this gravel thing that had begun a few years earlier.

And.... He Killed IT!!!
The Mr. Pink was steeper, shorter, and just plain meaner than any of my previous mounts. 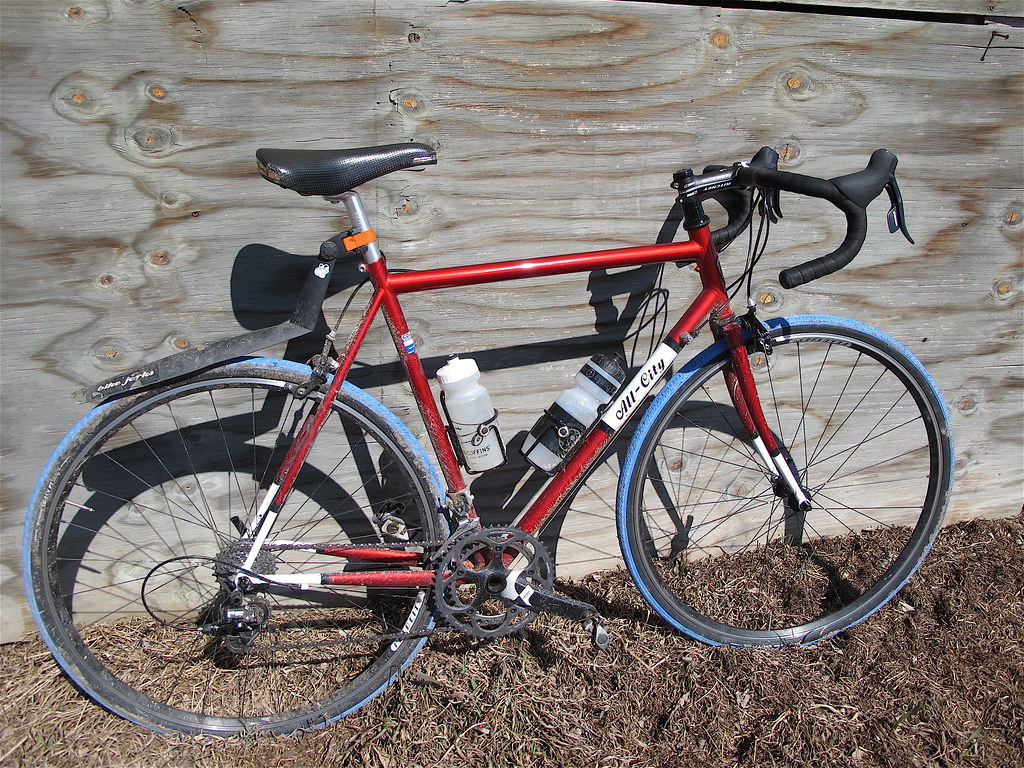 Here is a very early build on my red prototype which is still going strong thousands of miles and many races later. Although not clearly visible in the photo, the original proto Mr. Pink's are distinguishable by a very small, stiff dropout that never made production. Also of note is the flush top tube cable routing (instead of the visible brazed piece as on our bikes today) that made it onto the first generation of Mr. Pink's and Nature Boy Zona's. You may also notice that the black banding around the white areas is thicker than on the production bikes and that the fork lacks fender mounts.

Over the year's we've gone through two dropout iterations, eventually swapping over to our own design as well as the aforementioned change to the top tube cable routing. Other than that, we really feel like we hit the nail on the head. It's everything we ever wanted in a road bike and is substantially different in it's features and design than anything else on the market.

While the Mr. Pink has always had a large and vocal following among the courier and alleycat set, we are also very excited to see that the rest of the industry seems to be coming our way with the adoption of larger volume tires and added gravel capacity to their bikes. With these developments more and more folks are taking a hard look at our pride and joy, and we couldn't be happier to have them jump on the Mr. Pink bandwagon.

Hell yeah, Pinky. I race a crit last night on mine, then rode it to work today, from where I will acquire beer and ride home. Then I might ride it on 60 miles of gravel because Mr. F’n Pink is the best bike I’ve ever had.

“Wanted a road bike that ticked all my boxes” without going custom.

Yup. I did all my research and this is the bike. So stoked to order my frameset! Any word on the paint/finish yet?

Love my Mr. Pink! Still trying to get used to the longer brake caliper’s response, but the frame is stiff, comfortable, and fun as hell!

I just road it home from the store this afternoon.  So much fun!  Thanks for the info about Mr. Pink’s story.  Now the challenge will be a quick 30 mile ride as I prepare for the Habitat500 next week in Minnesota.