Last weekend I headed to Los Angeles to meetup with the crew from Golden Saddle Cyclery and Mudfoot for the second running of Mudfoot's spring century ride. This time called the Mudfoot Dirty Hundo. Joining on this trip were the crew from Angry Catfish here in Minneapolis, and my teammates for the ride, Garrett Davis and Joe Meiser, two of my homies from QBP. 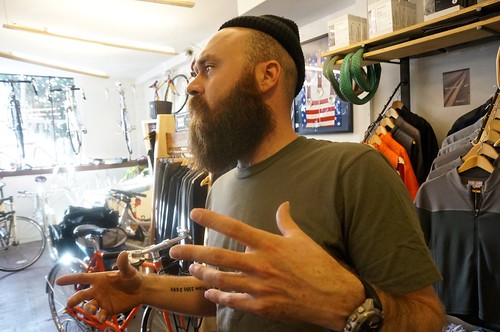 Our host for the weekend and my dear friend, Kyle Kelley of GSC. Myself and the Angry Catfish dudes packed his 300 square foot apartment vagabond style. 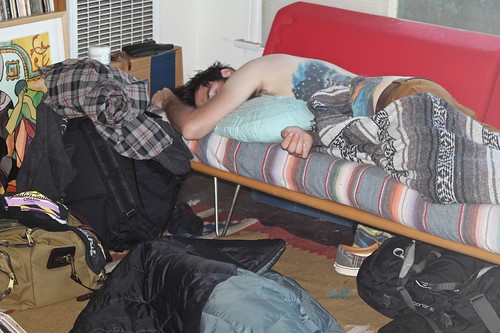 Josh from ACF crashed out at Kyle's 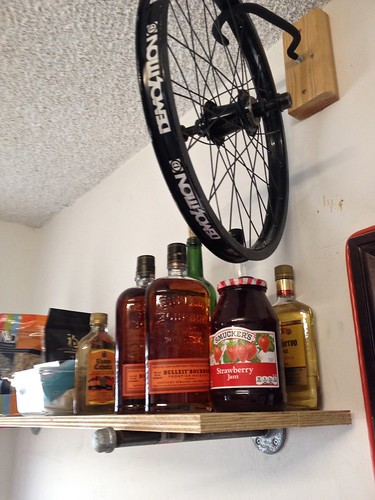 clearly GSC is doing something right 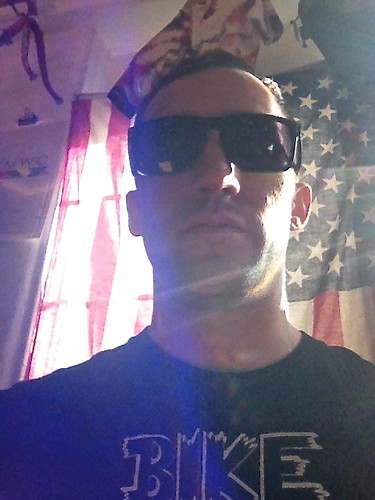 selfie in front of the now famous GSC flag

I arrived on Friday to build up my bike and get ready for tomorrow's long day in the Saddle starting at 7am. As the start of the event was at the shop, our host had to get up at 5 to make coffee and setup, which in an apartment that small, meant we all had to get up. Luckily we were still on Midwest time which meant it was a more reasonable 7am for us. 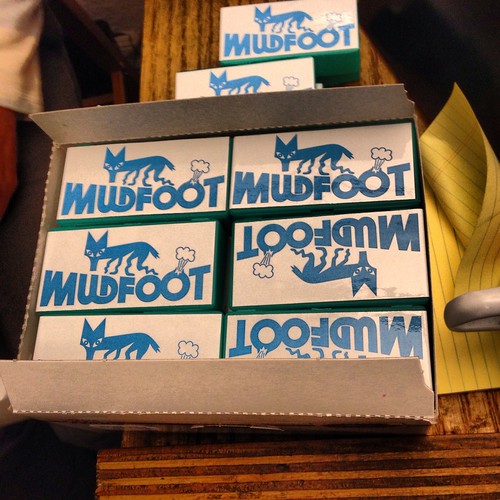 Patch kits that were handed out to the riders, they saved not only my team's day, but many others. Best race swag ever, and as always, spectacular branding. Note the deflated legs on the coyote.

The route was to be 90 miles, 30 miles of road to get to the dirt section, then 40 miles of fire roads scattered with talus that had been washed down from the cliffs above during recent storms, and 20 miles of pavement back to the shop. The tough thing was that once you entered the dirt there was no place to go, you were absolutely committed to finishing it. Almost all of the total 10,000* or so feet of climbing would come on that crucial dirt section.

Still considering a century to be a big deal, my Midwest was showing as I was one of the only riders to show up with a backpack or framebag much less a backpack and a framebag. Though I'm very glad I did as I was able to constantly eat, had no worries of running out of water, and got to play good guy giving out food to bonking racers. 90 miles doesn't sound like much, but when three hours can easily be eaten up climbing 5 miles or so, it gets to be a very long day on the bike. I think I finished somewhere around 7 or so at night. In any case, it was starting to get dark.

It's absolutely wild to me that the majority of racers only carried two bottles and whatever they could stuff in their pockets. I meanwhile had two tubes, sunscreen, a peanut butter and jelly, three bars, four packages of Cliff Bloks, jerky, fig newtons, a bannana, full tool kit and a bottle full of Skratch. 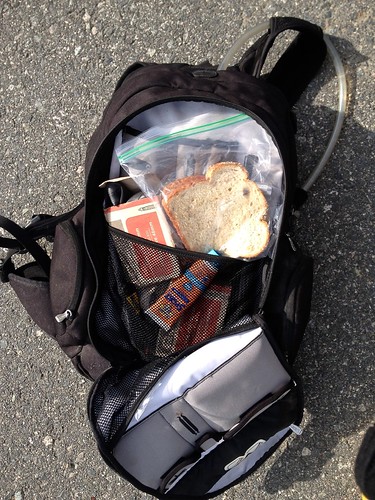 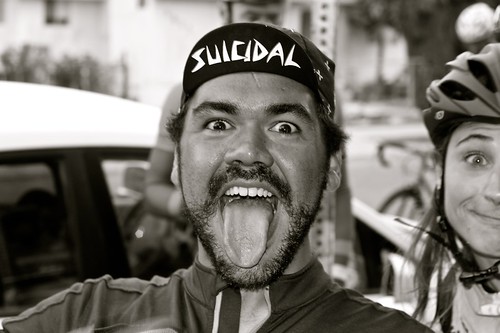 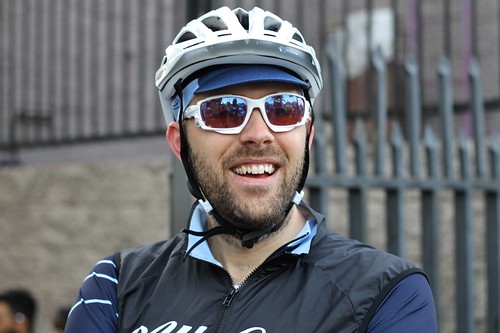 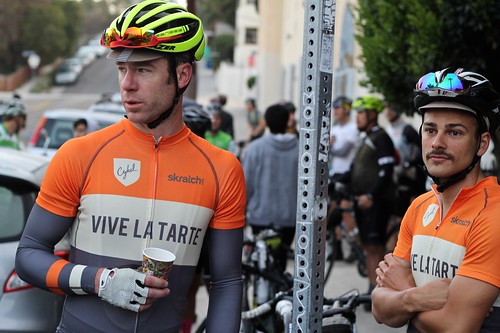 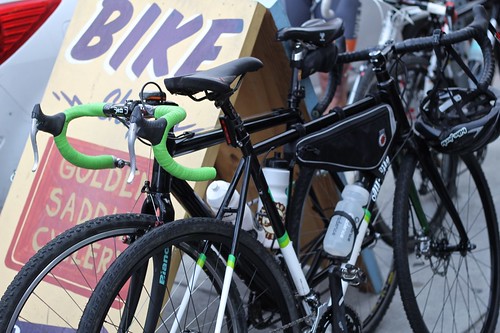 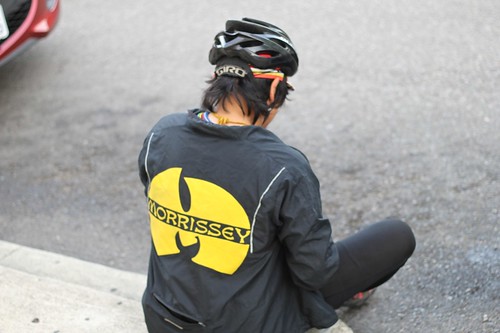 possibly the best cycling jacket ever

After a 20 minute neutral cruise to the outskirts of town, and the Angeles National Forest, we were off. My teammates and I were one of the first groups to scoot down the road and very quickly, Joe was up the road with the leaders. Garrett and I hung back conserving our energy, and Joe dropped back to check in. Knowing that he relishes every opportunity to waggle his dick, we sent him up the road free and clear to go chase his dreams of California glory.  This left Garrett and myself to rely on each other to get through.

I should mention, the three man team format is not just for fun, but rather a necessity that the organizers used to make sure that no one was on their own in the backcountry and to ensure safety. 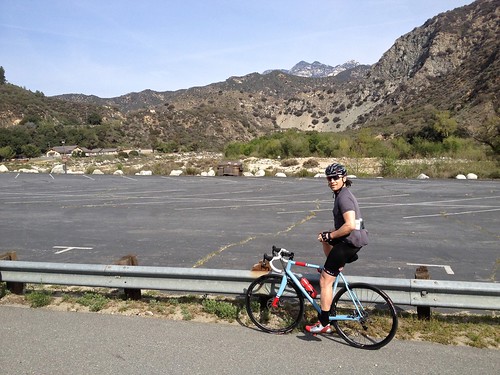 Above is my teammate Garrett, note that he is on a roadbike with road tires, this will play a major role in how the day unfolded. 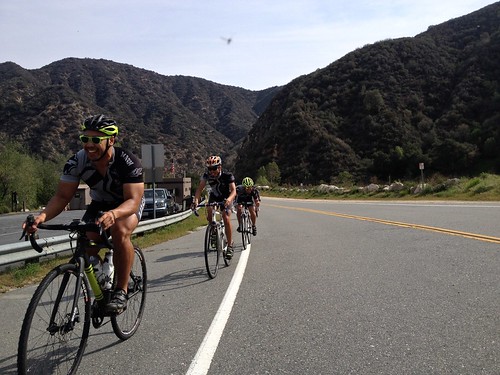 racers on the runup to the dirt section, this was the Mash team down from S.F. 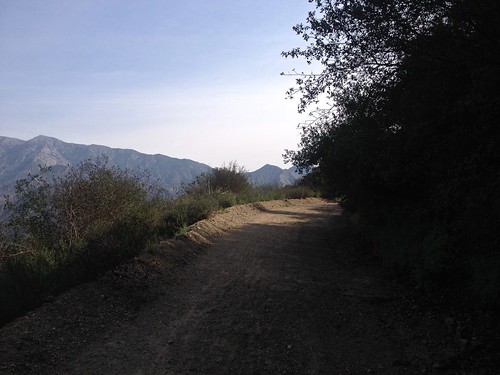 here you can see the type of terrain we were climbing through, simply gorgeous

As we began the epic ascent of the first mountain, things fairly quickly went ary as the recently deposited talus was razor sharp and did a number on Garrett's sidewall and he endured the first of what would eventually be, 12 or so punctures. 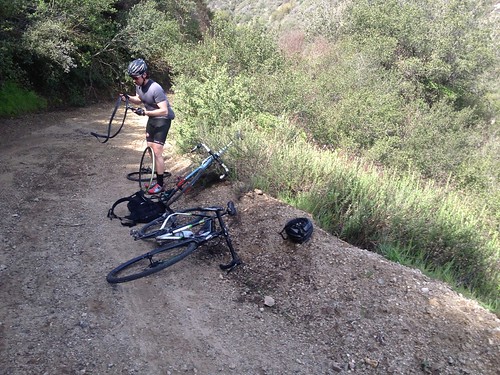 Fixing the first flat which caused the blowout of the sidewall that would plague us the rest of the day. 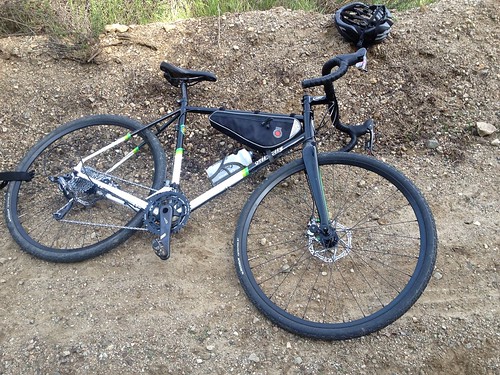 My rig for the race, just prior I fitted an 11-32 cassette to the bike and was damn glad to have it. I can't tell you how much I love this bike. The Macho King is going to be a great one. So stoked to be able to make it available to you. Unlike my compatriots I rode the right equimpment and received no flats on the Michelin Jets I was riding. 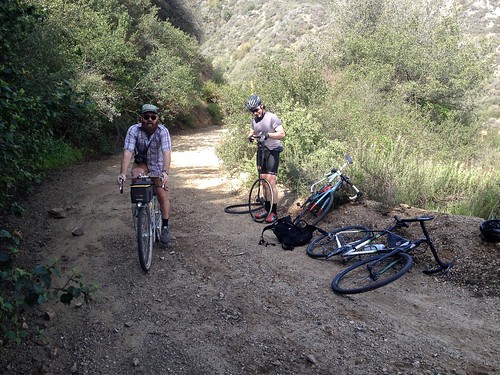 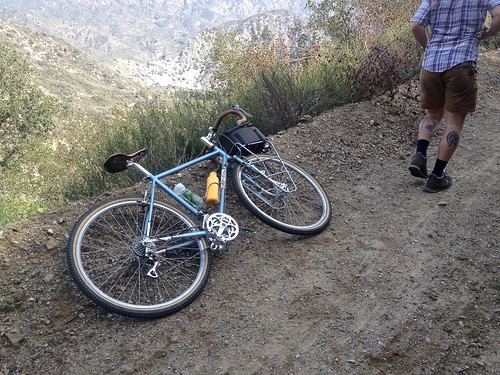 Proably the most famous Space Horse in the world at this point. It's a good bike.

Stopping was a bummer, but not so bad when the scenery looks like this: 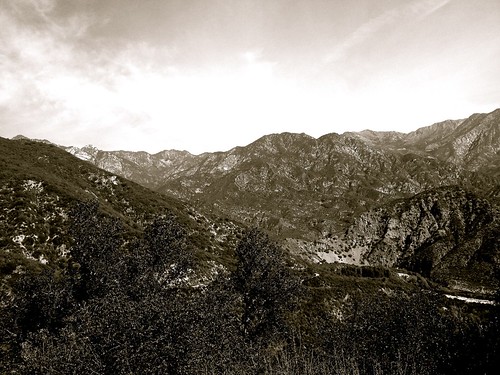 Shortly after that flat fix, came a pinch to the front tire, then shortly after, another rear blow out. We just couldn't win. Every half hour or so we'd be stopping to fix another hole, and the train of folks passing us kept increasing. It started to get worrisome, not because we weren't "winning" but because every person who passed us was one less person behind us who could potentially help if we needed it.  Garrett ended up using my spare tube, and borrowing one from a passing rider after retiring a tube after 6 or so patches to it. We even tried to encase a new tube in an older one in order to get one more layer of protection, but even that didn't stem the tide of misfortune.

The only thing we could do was try to keep a positive attitude and soldier on. 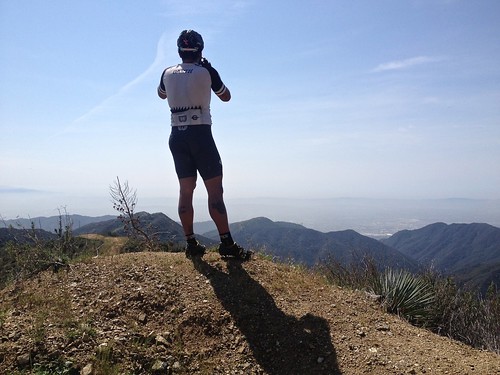 A rider scopes out the scenery while we change another flat 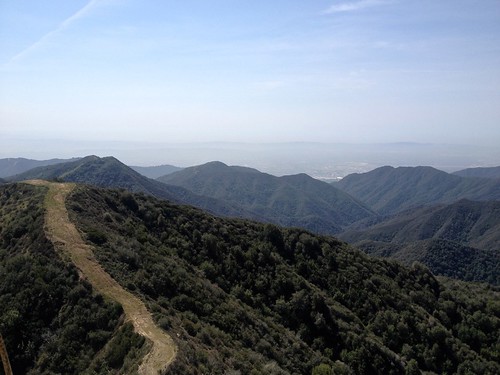 After finally topping out, Garrett softpedaled the descent into a remote wilderness campground. We then had a five mile climb out to "Red Box" where the option of finishing the route or heading back on pavement loomed ahead of us. As G was reduced to a crawl so as not to inflict any more damage to his tires, I went ahead a bit to suffer through the slog in solitude.  All day we had been speculating as to Joe's fate, since he was riding the same bike and tires as Garrett, we figured with his luck and speed he was long gone, probably not having any of the issues we suffered through.

Around a switchback up the canyon I noticed a blue jersey walking. Couldn't be Joe right? That had to be Mudfoot blue, not the new AC kit. Well I rounded a bend and almost fell off my bike giggling (things are hillarious when you're exhausted), here was Captain Stud plodding along in defeat.  I rolled up and said "You look like you could use a friend." to which he eagerly replied, "Will you be my friend?" Dude had six boots in his front tire alone. Well shit yeah, of course homes, so I threw him my last tube, tucked into a bar and we waited for Garrett to catch up.

After slapping each other on the back, and with these two unfortunate souls now able to help each other out, I went up the road to finish this thing. My teammates were definitely road bound so after stopping at the picnic at Redbox for a popsicle, I dragged my tired ass up the final two miles of climb to the top of Mt. Lowe and the final 20 miles back to town. 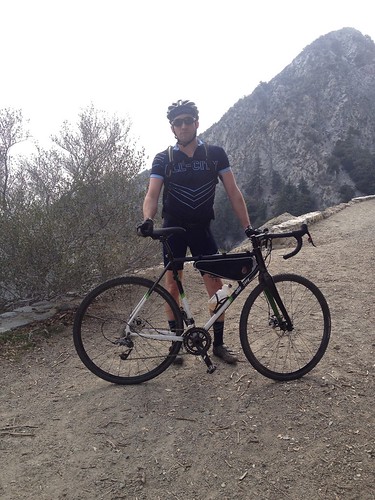 From there it was a super fun and sketchy descent of well maintained fire road and pavement back to GSC and eventually one of the top five showers of my life. 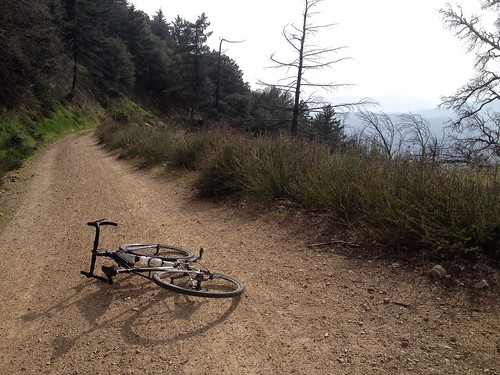 After my teammates rolled safely back, it was time to party. On winter legs I had completed the hardest ride of my life and was ecstatic and inspired. I've always considered a century to be a pretty big undertaking basically only doing them during the gravel races in the Spring and only one or two a year. After this though, I can't wait for the weather to cooperate and spend every weekend out there on 8,9,10 hour rides as far as my legs will carry. I want to spend every Saturday night hunkered down in my hammock in the woods sleeping off the miles and prepping for the ride home tomorrow.

Mileage, elevation, ain't none of it shit if you've got all day and a healthy attitude.

This was only the first of the mind blowing rides we would undertake on this trip, and I am so grateful to GSC, Mudfoot, my teammates, the crew from Angry Catfish and all the other riders for making it happen.  I cannot wait to test myself next year on whatever terrain the Mudfoot crew puts together. This is one that won't soon be forgotten.

Swell meeting ya buddy! And drinkin’ with ya! (Sorry for crashing into ya lol!)