Every year in Minneapolis I organize an event called the All City Championships.  This event is how I got involved in organizing the Minneapolis Cycling Community and was one of the reasons I started Bike Jerks (I needed an organization under which to organize events).  These things eventually lead me to help start All-City.

The event is coming up in August, my full spiel is below.  This is a huge deal in Minneapolis, and if you've ever wanted to visit us.  Now's the time. The big one is back for it's 5th anniversary. The dates are August 19th-22nd. Tons of stuff going on all weekend. If you've ever considered visiting MPLS, now's the time to do it. I'm going all out on this one and it's going to be f'ing huge.

This is my personal invitation to you, the world, to get yourself here and experience Minneapolis bike culture to the fullest. There will be racing, swimming, nudity (probably not the good kind), partying and partying. When it's all said and done you and your liver will likely no longer be friends. (bring it on Texas!)

Here's the rundown of events:

Thursday Night - Fixed Gear Freestyle Heavyweight Championship of the World
I'm renting out a skatepark for 3 hours. One hour of jam, and two hours of contest. We will ride from One on One to the park, get rad, and then go swimming. A & B classes, and a women's division if there are any women interested in competing.

After the amazing experience that was Midwest Mayhem, I am super excited to hopefully host all of the heavyweights of the FGFS scene. Fly in Thursday during the day, ride the comp, and on Friday we'll spend the day riding street (there are some crazy spots here, and lines that we've been waiting to see get done). The rest of the weekend will be a nonstop party. Talk to your sponsors, beg your parents, whatever you gotta do, just get here. It's gonna be a big deal.

Friday Night - Match Sprints, Trackstand, Afterparty
Head to Head single elimination tournament, mens and women's divisions.  The Robeast is the three year running champ, can any of you hosses out there dethrone the King of Sprint? As for trackstand, it will be a trackstand comp with people yelling "take your shirt off" the whole time.  The Bedlam theatre (best balcony in town) will be hosting us after the sprints, drink specials!

Saturday - All City Championship Alleycat Race, Afterparty
It's going to be a racer's race with the most badass woman and man taking home the title of "All City Champ." If you think you're fast, show up and prove it. Men's and Women's categories with prizes for 1st through 3rd place. There will also be a masters division for men and women 35 and up, a prize for first fixed gear, and a DFL winner.

Expect picks and drops, a time trial component, and about 25 miles or so of racing. I will be posting several of the manned stops ahead of time to help level the playing field for the out of town contingent.

The awards and afterparty will be in the alley behind One on One, there will be several kegs, and hopefully Kopish and D.O. (sp?) will be spinning jams. Likely some hot derby action will ensue. There are few things better than a good party in a downtown alley, and this is going to be a good one.

There may also be a little street fair in the alley before the race for any sponsors who want to come out and setup a table and show/sell their goods.

Sunday - Freeride
Zito's annual booze cruise wraps up the weekend on Sunday. A slow leisurely ride through town with beer, DJ's, and fireworks. The perfect capper to the weekend's festivities.

This is the biggest race in Minneapolis during the summer months and I hope all of you will consider attending, it would mean a lot to me. I will start a housing list in the coming weeks so you can hook up with a local and avoid hotel rooms. I'll make a post when that happens.

I'd also like to take a moment to thank all of the incredible sponsors who've signed on so far. Without you this wouldn't be nearly as much fun, you make it happen. Thank you. Hopefully more sponsors will be added to the list in the coming weeks. The handbills and posters are not yet printed so there's still time. (Hit me up if you're a company who'd like to sponsor this event, we'd love to have you)

The poster for the event was done by our friend Bjorn Christianson. In order to make back some of the effort, he will be screen printing a small run of these posters and selling them on his website and at the race. I'd like to encourage you to purchase this piece of Minneapolis history (sorry if "history is" too self aggrandizing, but it's the 5th year anniversary of the ACC!).

If you run a website or have a blog or whatever, I'd consider it a personal favor if you'd kindly repost this and help spread the word far and wide. The ACC is always a highlight of the summer and we'd love to see some faces from all over the country attend.

There'll be plenty of updates on the Bike Jerks blog and the race page will be up on the main Bike Jerks site shortly. Hope to see you there!

P.S. I started a Facebook page for the race and will be posting updates on there as well. If you wanted to be a fan of the page, that would be cool. 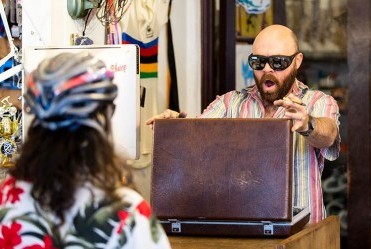